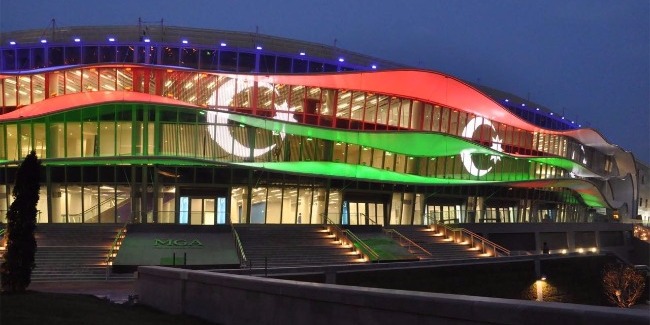 From 12 to 15 April 2018, Baku will host the 26th European Championships in Trampoline, Tumbling and Double Mini-Trampoline.

With the last European Championships of 2017 coming to a conclusion last week, focus quickly shifted to next year as the Local Organising Committee of the Baku Trampoline Europeans welcomed Mrs. Lisa Worthmann (GER), General Director of UEG, Mr. Vladimir Zeman (CZE), President of the Trampoline Technical Committee, and UEG staff to the National Gymnastics Arena. Home of the Azerbaijani national team in all gymnastics disciplines, the NGA will be a perfect host for these Championships, which are held every two years and included tumbling, individual and synchronised trampoline as well as double mini-trampoline. The Azerbaijan Gymnastics is an experienced host, having organised the inaugural European Games at the exact same venue and yearly hosting several World Cup events.

Led by their General Secretary Farid Gayibov, the organisers showed the venue, the equipment set-up and the proposed seating plan, before being joined by UEG’s Global partner SmartScoring to discuss the scoring system and the competition schedule.

Expect more innovation from them when it comes to sports presentation!