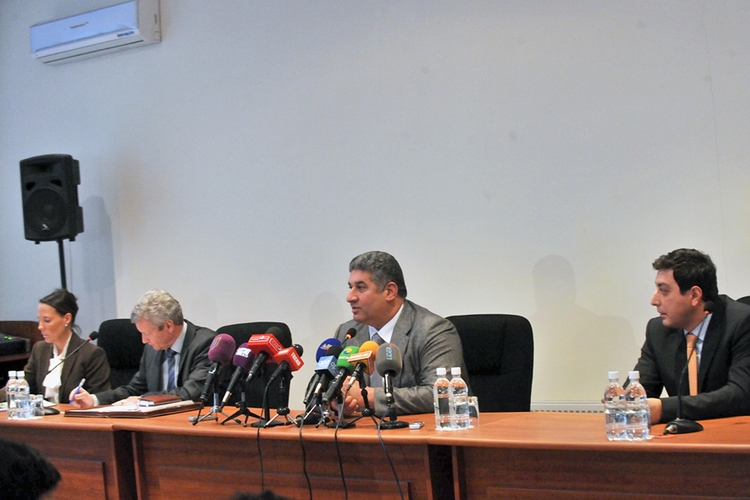 The capital of Azerbaijan will host the Rhythmic Gymnastics European Championships for the third time in its history in 2014! Baku organized such competitions at the high level in 2007 and in 2009.
In this connection, there was held a meeting which was followed by the press-conference at the country’s Ministry of Youth and Sports with a participation of Minister Azad Rahimov, Vice-President of the European Union of Gymnastics (UEG) – Rudolf Hediger, the organization’s director – Kirsi Erofejeff-Engman and Secretary General of Azerbaijan Gymnastics Federation – Farid Gayibov.
“I am pleased to inform you that the Rhythmic Gymnastics European Championships-2014 will be held in Baku,” A. Rahimov stated. It will also be a qualifying competition for the second Youth Olympiad-2014 in China. Euro-2014 will take place at the National Gymnastics arena which is currently under construction near “Koroghlu” underground station. It will be one of the best complexes in the country. As you know, 2012 is announced as the “Year of Sport” according to the order of President Ilham Aliyev and this news has come very opportunely,” the Minister noted.
“It is nice to be in Baku again,” stated R. Hediger. Unfortunately, President of UEG Georges Guelzec could not arrive here due to transportation problems in France. At the last meeting of the Organization’s Executive Committee, it was decided to hold the European Championships in Rhythmic Gymnastics in Baku in early June, 2014. There are 3 reasons for it. Firstly, the World and European Championships were held in Azerbaijan in 2005, 2007 and 2009. They all were organized at the high level. Secondly, Azerbaijan Gymnastics Federation – is one of our most responsible partners. We have very close relations. Thirdly, rhythmic gymnastics – is an Olympic sports discipline. There is a very great interest for it in Azerbaijan and it is seriously supported by the state. I would also like to express my gratitude to the Federation’s leadership, particularly, to its President Mrs Mehriban Aliyeva and Minister Azad Rahimov. I am sure that the European Championships to be held at the high level. UEG is glad to come to Baku again in 2014,” he said.
Kirsi Erofejeff-Engman, in her turn, informed that the delegation visited the Arena which was under construction and the national team’ base. “We have attended a training of the Azerbaijani gymnasts, met with the sportswomen and coaches. It is my first visit to Baku, and, therefore, I walked about the city center. Unfortunately, it was very cold, but we could assess a beauty of Baku nevertheless,” she emphasized.
Answering a question regarding the chances of Azerbaijan at the Olympic Games, the UEG Vice-President said: “Azerbaijan has very good gymnasts. They proved it many times. Your sportswoman Aliya Garayeva has a very good chance of successful performance at the Olympiad, and, she has to reach the final at the minimum.”
“As the Games are approaching, we speak more about it,” A. Rahimov continued. “It can turn out that a sportsman who takes part in London only thanks to the wild card, becomes a champion and vice versa. We all hope but it is very difficult to predict something.”
Speaking about the National Gymnastics Arena, Secretary General, F. Gayibov said: “Gymnastics Olympic Complex” will consist of main and supplementary hall. It will create all the conditions for holding various international competitions at the high level,” he noted.