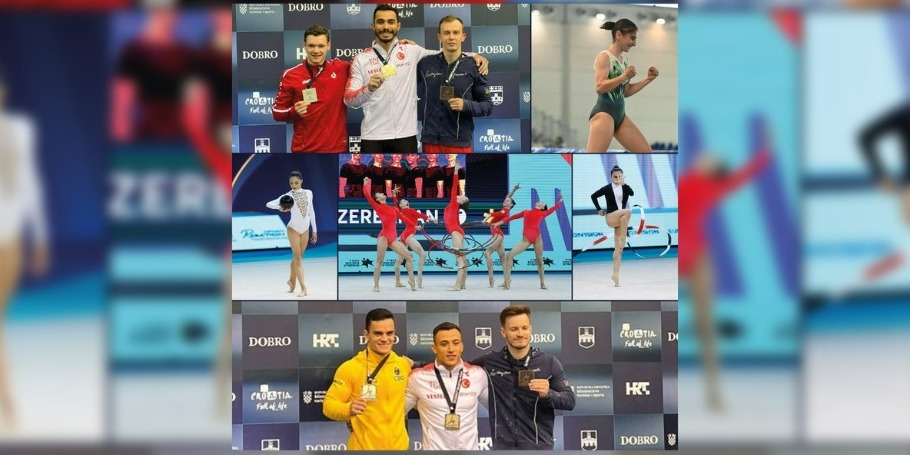 The Ministry of Youth and Sports has announced the ranking of National Teams` athletes in Olympic sports disciplines for July 2022. It is gratifying that the Azerbaijani Rhythmic Gymnastics National Team in group exercises has maintained its leadership in the list. Thus, according to their successful results at the World Cups held in Baku in April and Pamplona (Spain) in May, as well as at the European Championships held in Tel Aviv (Israel) in June, our team took the first place with 435 points. It should be mentioned that our team ranked 1st in last month’s ranking as well.
Our Rhythmic gymnast Zohra Aghamirova - winner of the 4th Islamic Solidarity Games, two-time Silver medalist of the Summer Universiade, participant of the Tokyo-2020 Summer Olympic Games, moved up one step and took the 2nd place with 250 points according to the final results of her performances at the mentioned World Cup series.
The successful performance of our Artistic gymnast - Nikita Simonov at the World Cups in Qatar & Egypt (March), Baku (March 31 - April 3) and Bulgaria (May) resulted with taking the 6th place in the ranking with 125 points.
Arzu Jalilova - Silver and Bronze medalist of the World Championships among juniors, Bronze medalist of the European Championships ranked 7th (160 points) for the results she achieved at the World Cup held in our capital city in April and the last European Championships.
Our Trampoline gymnast - Seljan Mahsudova takes the 12th place with 105 points, according to the results of her performances at the World Cups held in Baku & Switzerland, and the European Championships held in Italy.
Representative of Azerbaijan in Artistic Gymnastics - Ivan Tikhonov ranked 19th with 90 points, according to the results of his performances at the World Cups held in Qatar (March) and Croatia (June).
It should be mentioned that the rating points are calculated in accordance with the rules established by the Ministry of Youth and Sports. The rating coefficient is calculated primarily for Olympic sports disciplines (among seniors). International competitions in sports disciplines are divided into 5 categories according to their rating, and points are calculated as per to the places taken at these competitions.