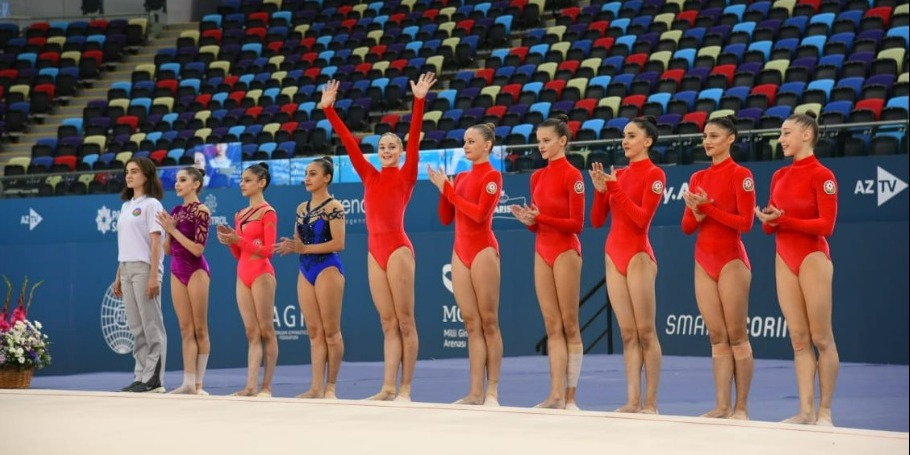 On August 9-18, the 5th Islamic Solidarity Games will be organized in Konya (Turkey). At the Games, our country will be represented in 4 Gymnastics disciplines (Rhythmic Gymnastics, Aerobic Gymnastics, Men’s and Women’s Artistic Gymnastics).
On August 5, the dress rehearsal was held at “Milli Gimnastika Arenasi” (National Gymnastics Arena) within the framework of the final preparation stage of our National Team in Rhythmic Gymnastics for the Islamic Solidarity Games. At the dress rehearsal, our gymnasts presented their programs that they would demonstrate at the Games.
The dress rehearsal were watched by Deputy Minister of Youth and Sports - Mariana Vasileva, well-known Russian gymnast, five-time World Champion, Olympic Games’ medalist (Atlanta-1996), Ambassador of the 2019 Rhythmic Gymnastics World Championships held in Baku - Yana Batyrshina and gymnasts representing both the capital and regions.
It should be mentioned that Zohra Aghamirova, Ilona Zeynalova and Alina Gozalova will compete for medals in the Individual program in Rhythmic Gymnastics competitions at the 5th Islamic Solidarity Games. Our Team in Group Exercises - Gullu Aghalarzade, Laman Alimuradova, Kamilla Aliyeva, Zeynab Hummatova, Yelyzaveta Luzan and Darya Sorokina will also try their strength at the Games.
At the competitions in Aerobic Gymnastics of the major event - Madina Mustafayeva & Vladimir Dolmatov will perform not only in the Individual program, but within the Mixed Pair as well.
Vladimir Dolmatov, Khoshgadam Guliyeva & Madina Mustafayeva will compete within Trio.
Milana Minakovskaya and Samira Gahramanova will represent Azerbaijan at the competitions among women, while Ivan Tikhonov, Mansum Safarov and Nikita Simonov will perform at Men’s Artistic Gymnastics events. It should be mentioned that today the members of our National Team in Men’s Artistic Gymnastics left for Konya.
In Konya-2021, Rhythmic Gymnastics competitions will be held on August 13 & 14, Artistic Gymnastics - August 10 & 11 and 17 & 18, and Aerobic Gymnastics - August 13 & 14.