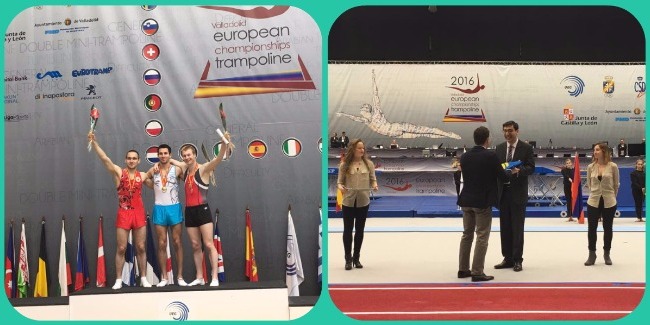 Our debut at the Double-mini Trampoline competitions has brought a bronze medal to the country. Having received 74.100 points from the judges, Dmitriy Fedorovskiy took the 3rd place. The Russian athletes shared the 1st and 2nd places between themselves.

According to the results of the qualifications, representatives of Azerbaijan in Trampoline Gymnastics succeeded to reach the finals for the first time with a participation of best 8 gymnasts of Europe both in the individual and synchronised competitions among men. Eventually, Oleg Piunov took the 5th place in the individual program, having shown his best result (57.525). Within a synchro pair, Oleg, together with Ilya Grishunin ranked 7th.

Mikhail Malkin reached the final of the European Championships’ events in tumbling for the first time, where he closed up the eight of finalists.

At the end of the closing ceremony, the flag of the European Union of Gymnastics (UEG) was handed over to Azerbaijan as the next - 26th European Championships in Trampoline Gymnastics will be held in Baku in 2018. The UEG flag was presented to the Secretary General of Azerbaijan Gymnastics Federation, Farid Gayibov, acted as the President of the Appeal Jury of the current Championships within the framework of his authorities as the UEG Vice-president.

Although the development of Trampoline Gymnastics in Azerbaijan commenced since the end of 2013, our country has already successfully organized the World Cup in this gymnastics discipline in Baku on March 5-6 this year.