Champions of Azerbaijan are known 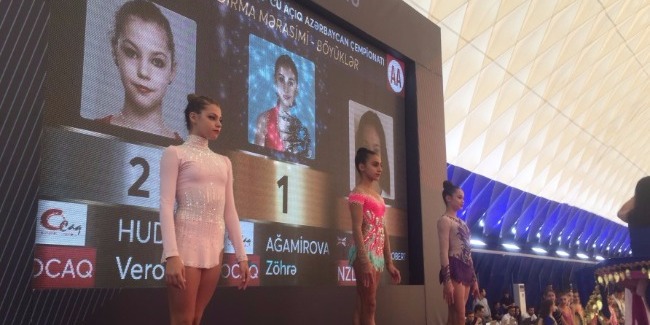 Today, the 24th Open Rhythmic Gymnastics Championships at the subsidiary hall of the National Gymnastics Arena has completed its work.

25 junior and senior gymnasts competed in the events for the title of the country’s champions. The best result among the juniors in the all-around was shown by gymnast of the Baku Gymnastics School, Darya Farshbafshakhriyari. She celebrated her victory by getting 49.250 points from the judges in total. Narmin Samadova (48.050) and Arzu Jalilova (47.700), the representatives of Ojaq Sport Club stopped at the positions followed. Our young gymnasts took the 2nd and 3rd places accordingly.

The excitement and tense of rivalry were observed among the gymnasts competing in the seniors’ age category. Our girls tried to demonstrate faultless performances on the floor to win the judges' sympathy. As a result, the promising gymnast of our national team, the representative of the Ojag Club, Zohra Aghamirova won the title of Azerbaijan Champion (64,900). Veronika Hudis, the representative of the same club, mounted the second step of the podium (47.500). Along with the local gymnasts at the Open Azerbaijan Championships, representatives of New Zealand, currently participating in the training camp in our country, competed in the events as well. The interesting compositions performed by Tanaka Probert Ayan were also noticed by the judges. She took the 3rd place with 45.600 points.

Thus, we congratulate all the champions and the prize-winners of the Open Azerbaijan Rhythmic Gymnastics Championship and wish them to conquer the higher peaks in their future sports career.