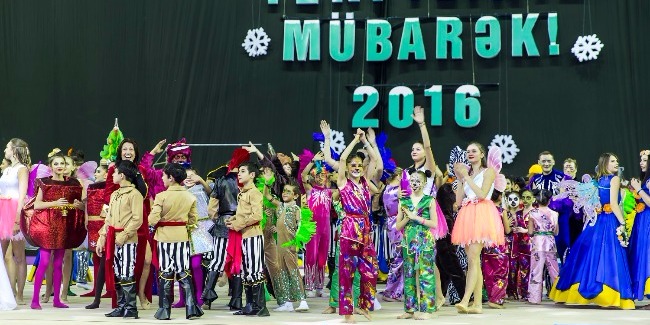 New Year is a favorite holiday of many of us from the early childhood as it hides fabulous imagination, which does not leave us even when we become quite adult. Head Coach of the Azerbaijani Rhythmic Gymnastics National Team Mariana Vasileva, who is an author and stage director of the “Dream on the New Year’s Eve” festive show, realizes it very well.

Yesterday, you could see not only happy faces of kids, but the representatives of different generations, who with great pleasure watched fabulous animated cartoon characters dressed up to children’s favorite heroes’ clothes at crowded hall of Milli Gimnastika Arenası (National Gymnastics Arena), where the traditional festive show performed by the National Teams’ members in 7 gymnastics disciplines took place.

On Rhythmic Gymnastics floor, incidents developed around mysterious character Peter Pan who in the course of the show was trying to enter into the thrilling gymnastics world and to see his beloved fairy Dzin-dzin. At Milli Gimnastika Arenası, he was met by brave Samurais, parrots dwelling in Rio, pirates, inhabitants of the island of Madagaskar and cowboys of Wild West, who climbed on Men’s and Women’s Artistic Gymnastics apparatus demonstrating their skills, then jumping on Trampoline devoted themselves to the splendid feeling of flight, showed Acrobatic feats and skills on Tumbling Track and art of Rhythmic Gymnastics apparatus handling. And, all these were performed with great artistic impression, great enthusiasm, great love to gymnastics, to all surroundings, and, of course, towards spectators. Head coaches, gymnasts, grew into a role to such an extent that it was difficult to believe that they were athletes, experts in gymnastics disciplines, but not actors of famous theatres. But the names of Head Coaches well-known in Azerbaijani gymnastics who played the roles – Mariana Vasileva (Rhythmic Gymnastics – fairy), Nina Pravdina (Women’s Artistic Gymnastics – Samurais’ head Kung Fu Panda), Vladimir Shulikin (Trampoline Gymnastics – dweller of Rio) and Irada Gurbanova (Acrobatic Gymnastics – Madagascar’s hero Gloria) will help us to believe in it.

In the course of the whole show, Peter Pan (Kamil Guliyev – choreographer), having overcome many difficulties receives the keys into the mysterious gymnastics world from the hands of Grandmother Willow (Leyli Mishina – choreographer), where, finally, he meets his beloved fairy Dzin-dzin (Ayshan Bayramova - rhythmic gymnast). And, close to the end of the show, the audience having held their breath watched how Rhythmic Gymnastics star Marina Durunda was flying down from the high dome of the arena onto her favorite floor demonstrating the whole tenderness of this gymnastics discipline. And, at the end of the show, the spectators were plunged into the festivity of flying balloons coming down from the same dome.

The show’s main idea was to demonstrate essence and beauty of all 6 competitive gymnastics disciplines having united under the 7th non-competitive one – Gymnastics for All, thus, favoring festive mood not only to themselves, but to the audience, gymnastics fans, and, especially, to our dear children.

Having watched the show and felt yesterday’s atmosphere at the hall, you come at a conclusion that today’s success in gymnastics in the country is a fruit of one big gymnastics family, the members of which appreciate the beauty, who feel the responsibility not only towards their job but everything they undertake, and, mainly – the united family at the head of President of Azerbaijan Gymnastics Federation Mrs Mehriban Aliyeva, who especially knows a value of art, spots and healthy way of life.