Durunda and Azerbaijani group team - are the winners of the World Cup in Hungary! 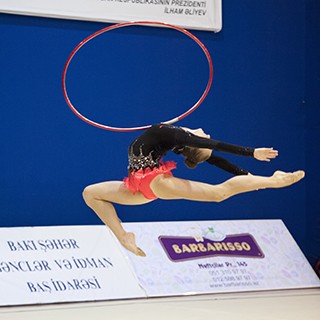 According to the press service of Azerbaijan Gymnastics Federation, the prospective participant of the European Championships to be held in Baku, having received 17.6 points, did not leave any chance to the gymnasts from Ukraine and Russia who were following her in the final with a hoop.

Very complicated program, bright leotards, the judges' high scores and ovation of the audience led to the sounding of the national anthem in unison with raising of the banner of Azerbaijan towards the dome of the Hungarian arena.

In comparison with individual tournament, chords of the majestic music by U. Hajibayli were listened to by 6 gymnasts when it sounded for the second time. Our group team won a victory as it was a week ago but in the all-around this time. And in their striking performance with 3 balls and 2 ribbons, Sabina Abbasova, Aliya Pashayeva, Siyana Vasileva, Diana Doman, Aliaksandra Platonova and Aynur Mustafayeva took the 3rd place. Junior gymnasts are also preparing for the Euro-2014 to be held in Baku. Thus, Zhala Piriyeva and Zuleykha Ismayilova won the bronze medals in a team competition of the international tournament held at the same time with the World Cup. Zhala and Zuleykha have one more “bronze” on their credit sides for the performances with a hoop and clubs accordingly.

“I would also like to make mention of Nilufar Niftaliyeva, who competed together with Durunda and managed to reach the World Cup series final for the first time. Her 7th place means a lot both for us, the specialists, and, for the gymnast herself,” Mariana Vasileva, the head coach of the Azerbaijani National Team stated. "The same I can say about the successes of Gulsum Shafizada and a junior gymnast Beyza Demir, another pretenders to be included into the composition of the national team to compete at the European Championships in June. The first one won a victory in all the four finals and took the second place in the all-around, and, the second won the "gold" in an exercise with a ribbon in the international tournament held in Calais (France). And what comes next? Within the days of celebrating of favorite "Novruz" holiday, we will set out for Stuttgart. Another World Cup series to be held in this German city, well-known for its automobile production. And, we hope to come back to festive Baku in festive mood as well."

Meanwhile, the competitions of the World Challenge Cup in Artistic Gymnastics has come to an end in Cottbus, West Germany, where four Azerbaijani representatives performed at. They did not manage to take the prize-winning places but Marina Nekrasova`s performance in the final on vault and ranking the 6th, being just 0.7 points behind from the “bronze”, indicated the potential of the gymnast and required more hard work to be carried out by the coaches' staff on the threshold of the European Championships to be held in Sofia in May.