DURUNDA BECOMES THE FIFTH IN THE WORLD 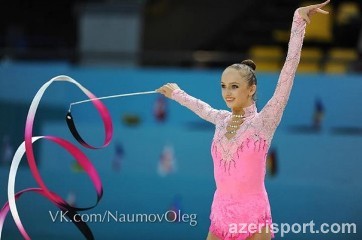 Marina Durunda had reached the final with a ribbon. She got 17.5 points from the judges in the final which enabled her to share the fifth place with a Russian Margarita Mamun.

At the same time, Durunda took the 9th place and Lala Yusifova the 17th place in the all-round qualification. Both gymnasts are among twenty four strongest athletes who compete in the all-round final on August 30.

Durunda has achieved her first significant success at the World Championships. In an exercise with a ribbon, she reached the final and didn't lose her head among more skilled rivals, having taken the high fifth place. “Before, I could not even imagine to perform at such an event not mentioning reaching the final. You see how high is the level of the rivalry here and I am pleased to realize that this championship successfully develops for me. But, certainly, I could not reach all this without the head coach of our national team Mariana Vasileva who put so much effort to my trainings. It was great to hear that I had reached the final, especially, if to take into account that an exercise with a ribbon was the last chance for me to find myself in the list of top eight gymnasts with separate apparatus. I like this exercise!..”

“We have to do our best with Lala in the all-around final. I hope we will improve our results shown in the qualification.”

“It was very pleasant to hear chanting of the Azerbaijani fans uttered from all the corners of the arena. And, it was also very pleasant to perform in such an atmosphere,” the gymnast summed up.