DURUNDA IS THE FIRST IN ITALY, YUSIFOVA IS THE THIRD ONE IN GERMANY 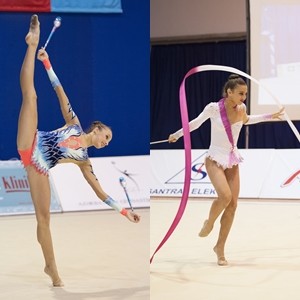 According to the press-service of Azerbaijan Gymnastics Federation, the traditional A1 Italian Championship started in Desio town.

A.S.D. Armonia d'Abruzzo-Chieti Club for which Marina Durunda performs, became the winner of the given round in many respects thanks to an Azerbaijani gymnast’s performance. Thus, Durunda got 17.8 points for the exercise with a ball, which was the highest result among team-mates and the second highest one at the Championship. In total, A.S.D. Armonia d'Abruzzo received 98.35 points, and, has 25 points for now. Marina's club takes the 3 points lead over "Gynnastica" club from San-Giorgio led by World Champion from Ukraine Ganna Rizatdinova. The second round – will take place on November 2 in the small town of Arezzo.

Unlike her team-mate, Lala Yusifova performed with all four apparatus. And she became the bronze medalist in the final with clubs of the Grand Prix final in Berlin. Lala received 17.15 points from the judges and lost only to two Russians, Daria Svatkovskaya and Margarita Mamun, who became the all-around winner of the Grand Prix. In other finals - with a ball and a ribbon - Yusifova took the 4th places, and became the 6th one with a hoop and in the all-around.

According to the national team's head coach Mariana Vasileva, "the European public splendidly received both Lala and Marina". “They perform better with each event, let's say, they perform more confidently, and many experts are delighted and have good impression on our gymnasts. And this week, Yusifova and Durunda, as well as a junior gymnast Zhala Piriyeva will participate in the RG Worldwide Club Championships in Tokyo within "Neftchi" club,” she said.