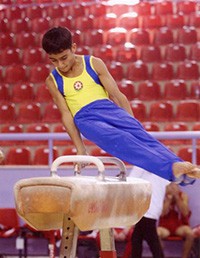 A fourteen-year-old artistic gymnast of Azerbaijan, Elvin Aghadadayev, won the gold medal of “Bosphorus Cup” international tournament held in Istanbul the day before.

According to the press service of Azerbaijan Gymnastics Federation, he took the first place in the final of the exercise on the pommel horse, having accurately performed all the circles and swings and not for a single moment giving a chance to Turkish gymnast to dream of a gold medal.

“And this is not the whole story,” a judge of international category Rza Aliyev, who competently and fairly proved himself in the board of judges, merrily recounts. “Elvin also takes from Istanbul a bronze medal for which he competed on bars and created a real furore. He performed beyond praise and won the judges’ recognition, surprised his rivals and the world specialists thought highly of him. Moreover, it was Elvin’s debut on the international arena and we could see how successful it turned out to be – with a great national anthem of Azerbaijan and raising of our banner at the Sports Complex named after Ahmet Jomert.”

Our team didn’t remain without a silver medal as well. It was won by the team’s leader, Shakir Shikhaliyev, who performed among the seniors. Having completed his more sophisticated combination on the bars, the competitor of the last European Championships took the second place taking more than one point lead over the experienced gymnast from France.

“This has been the first great success of Azerbaijan’s artistic gymnastics since 1995,” a coach Rufat Abbasov recalls. “I remember how our Kamran Farzaliyev was standing on the podium in separate finals of the competition in Iran.”

The way to this victory passed through the continual training camp: Elvin was training both in Baku and Moscow, and Shakir was training in Minsk in the course of 3 months. All the specialists, who worked with them, played a great role in their victory.

Now, the gymnasts will prepare for the next competitions – the first is the World Cup event in Stuttgart to be held in November. And in order to have a better approach to the forthcoming tournament and keep a good form achieved, S.Shakir will set out for the training camp in Germany in October.