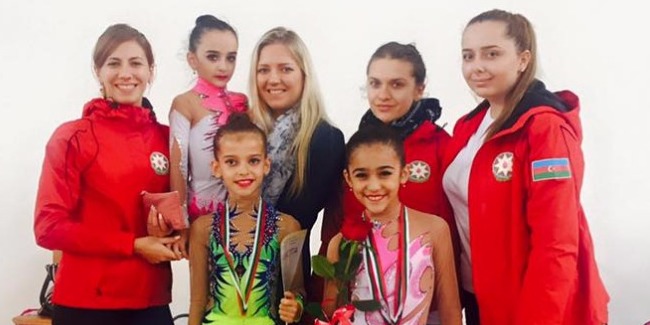 This weekend, young representatives of “Ocaq” Sport Club have taken part in the internationl tournament held in Bulgarian Plovdiv city for the first time.

The second and third “gold” was won by Narmin Bayramova (born in 2005) included into the youngsters’ category. She won the 1st place in the all-around and in exercises with a ball. In the same age category, a silver drop of medal rain fell on a gymnast Kamilla Aliyeva (2006) for her performance without apparatus. And the youngest representative, Alina Mammadova (2007), contented herself with the 9th place in the all-around.

Afterwards, the gymnasts belonging to elder category, pre-juniors joined the graceful contest among individual sportswomen. The 1st place with a hoop was won by Narin Gurbanova (2003) successfully tested her strength both in the individual and group program. And, the performance without apparatus brought the “bronze” to Farida Shafiyarzada (2004).

2 silver medals were taken by a junior Zohra Aghamirova (2001) in exercises with a rope and a hoop. And her peer Ayna Jafarova became the sixth after the performance with a ball.

The representatives of “Ocaq” club also took the prize in nomination “The Most Artistic Gymnast” presented to Eleonora Yusifova (2004) by the event’s Organizers.