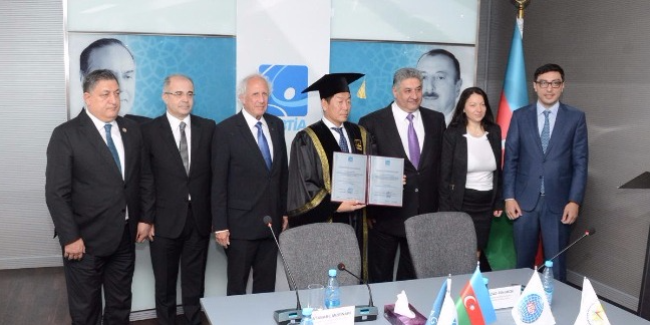 Today, the President of the International Gymnastics Federation (FIG) Morinari Watanabe was awarded the title of Honorary Doctor of the Azerbaijan State Academy of Physical training and Sport. The award ceremony took place in the Academy building in Baku.

"Not only me was awarded this honorary title, but the whole gymnastic family as well, and on behalf of everyone I want to thank you. Exercise is very widely developed in Azerbaijan. I particularly want to stress the role of the First Vice President Mehriban Aliyeva in the development of gymnastics in Azerbaijan. Of course, the General Secretary of the Federation of Gymnastics of Azerbaijan Farid Gaibov also plays a great role here. Azerbaijan showed high results in gymnastics at the First European Games," the correspondent of Vestnik Kavkaza cited him as saying.

Watanabe noted that Azerbaijan leads the development of not only gymnastic disciplines, but also of other sports, and expressed confidence that from now on it will continue to develop.