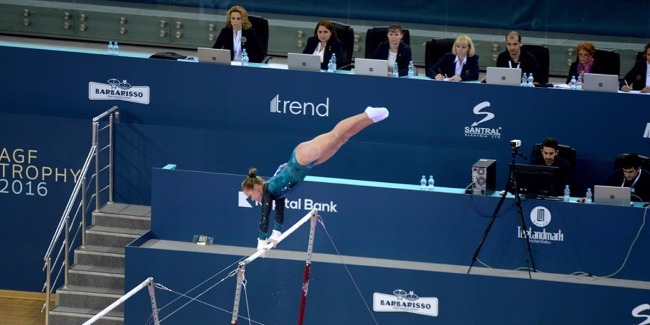 The first day of the Qualifications of the FIG World Challenge Cup in Artistic Gymnastics in Baku has come to an end.

During the competitions, men demonstrated their routines on Floor, Pommel Horse, Rings, while women executed Vault and exercises on Uneven Bars.

According to the results of Qualifications, Azerbaijani representative in Men’s Artistic Gymnastics Petro Pakhnyuk qualified for the Finals on Floor, while Oleg Stepko became the finalist on Rings, to be held on February 21.

As for our Women Artistic Gymnasts, Mariia Smirnova reached the final on Vault and Yuliya Inshina will compete in the final exercises on Uneven Bars.

The first day of the World "Challenge" Cup in our country has also remembered with demonstration of a new gymnastics element on Floor exercises by three-time World Champion gymnast Kenzo Shirai from Japan which was performed at international level for the first time in Baku.

During the event, he performed a double somersault with triple twist. The element has been recently approved by the International Federation of Gymnastics (FIG) and was named "Shirai Three", after its originator - the gymnast himself.

Bearing in mind namely Shirai and other favourite gymnasts of the events, Vice-president of Azerbaijan Gymnastics Federation Altay Hasanov, who announced the FIG World Challenge Cup open on February 19, emphasized in his speech that there were enough strong and well-known athletes among the competitors.

Speaking at the official part of the ceremony, Deputy Minister of Youth and Sports of the Republic of Azerbaijan Ismayil Ismayilov and President of the FIG Technical Committee in Women’s Artistic Gymnastics, Olympic Champion Nellie Kim highly appreciating the recent development of gymnastics in the country whished successes to the athletes.

The official speeches were followed by “The Future of Azerbaijani Gymnastics” composition constructed by Head Coach of the Azerbaijani Rhythmic Gymnastics National Team Mariana Vasileva, in which new generation of Rhythmic gymnasts, Men and Women Artistic gymnasts, Trampoline gymnasts, the representatives of Acrobatic, Aerobic Gymnastics and “Gymnastics for all” have mesmerized the gymnastics fans at Milli Gimnastika Arenası with alternately colourful performances.

At the conclusion of competition, all gymnasts jointly have created the harmony of the elegance, beauty, power, flights and circus elements. Musical accompaniment, chosen with special taste, has significantly reduced the excitement of the upcoming competitions.