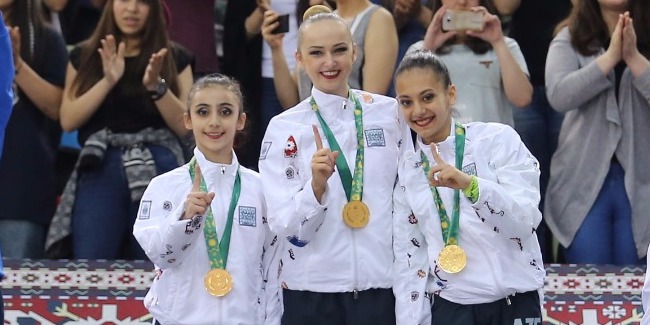 Our girls have won the first award – the gold medal at Rhythmic Gymnastics events, included into the program of the IV Islamic Solidarity Games for the first time.

Having received 128.200 in team competition, Marina Durunda, Zhala Piriyeva and Zohra Aghamirova managed to mount the first step of the podium.

It should be noted that Marina Durunda and Zhala Piriyeva reached the finals with all 4 apparatus.

Zohra Aghamirova also could have performed in all finals according to qualification results. However, as per the rules, only 2 gymnasts from each country are entitled to take part in the finals. Therefore, Zohra will not join the finals.