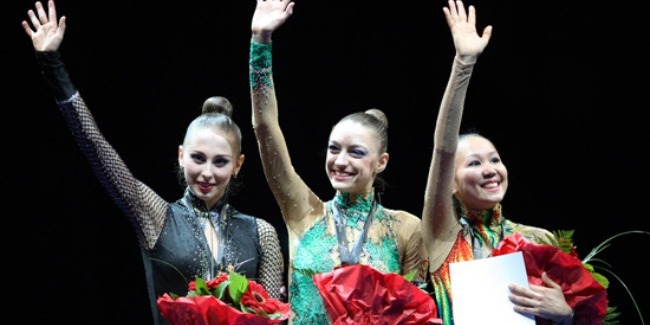 This is the first medal in the history of Azerbaijan at the European championships in the all-around!

After the ceremony, our gymnast shared her overwhelming emotions.

"I am very happy and thankful to all, - she said. - This is a success all over Azerbaijan, all those who have been ill for me. I thank my coaches and everyone who went with me to this success. I hope that our junior team and the group will also perform this successfully. Special thanks to my Federation president Mehriban Aliyeva, without which there would be today's success. "

Second, the representative of Azerbaijan - Zeinab Javadli - took 19th place with a score of 97.25 points.

The first day of the European Championships in Rhythmic Gymnastics in Bremen completed the individual finals of the junior with a rope and hoop.

In both finals broke representative of Azerbaijan. Lala Yusifov for exercise with the hoop got 25,125 points and took the 4th place. Speech rope Mustafayeva Aisha was estimated at 24.55 points, which allowed her to take 5th position.

In both cases the winners were Russians - Valery Tkachenko, respectively, and Alexander Merkulov.

In the team competition after the execution of two types of Azerbaijani national team with a common result of 48.65 ranked 5th among 32 countries, behind Belarus, Russia, Germany and Ukraine.

Note that the Bremen had gathered a large group of support Azerbaijani gymnasts. Fans came from Baku, and from various cities in Germany. In order to support our athletes in Bremen came as representatives of the Embassy of Azerbaijan.