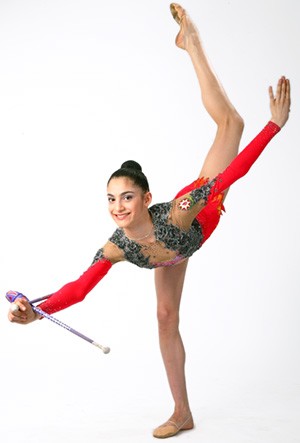 The World Cup event in rhythmic gymnastics has come to the end in Astana. Azerbaijan was represented by a reserve gymnast of the forthcoming Olympic Games in Beijing Anna Gurbanova and Zeynab Javadli.

According to the press service of Azerbaijan Gymnastics Federation, Gurbanova took the 11th place among 26 competitors in the all-around qualification. As to Javadli, she performed in the out-of-competition program and won the third place.

A Russian Yevgeniya Kanayeva, the overall champion of Euro-2008, became the owner of the World Cup. She took the lead over the floor’s hostess, Aliya Yusupova. Another Russian gymnast Olga Kapranova became the third, having beaten Vera Sesina in the first lap of the contest for the second permit in the Olympic national team of Russia.

One more World Cup event will be the last pre-Olympic tournament to be held in Irkutsk on July 25-26. The participants of the Olympic Games, Aliya Garayeva and Dinara Gimatova will perform in this Russian city.

Other members of the Olympic national team of Azerbaijan – Vafa Huseynova, Anna Bitieva, Valeriya Yegay, Alina Trepina, Anastasiya Prasolova and Dina Gorina, who are completing the training camp in Sofia, will move to Varna, the seaside resort on the Bulgarian Black Sea coast, where they will perform in the World Cup event among group teams on July 24-25.