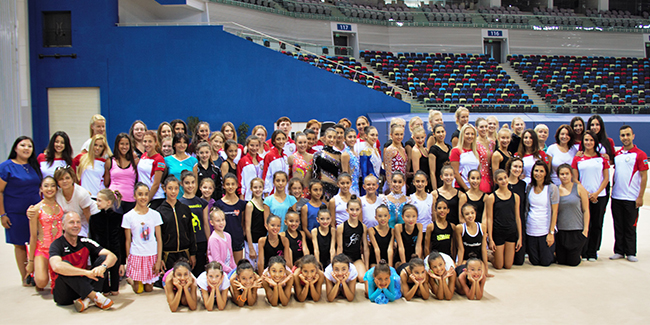 As it is known, trainings of the Azerbaijani National Teams in all 6 gymnastics disciplines are held at the National Gymnastics Arena opened in April 2014.

Sportswomen from different countries of the world periodically join the trainings of the Rhythmic Gymnastics National Team. Along with the representatives of the European continent, such countries as Italy, Latvia, Norway, Finland, the Czech Republic, Slovakia, Hungary, neighbouring Turkey, gymnasts from Asia, namely from Kazakhstan, North-American continent – Canada and Mexico, as well as from Pacific New Zealand have been here.

Having once participated in the training camp and used the conditions created both for trainings and medical-restorative procedures, as well as impressed by our hospitality, the guests repeatedly returned to train at the Arena.

While entering into the hall on these Baku’s summer days, one might think that there is another international event here. This is connected with the fact that gymnasts of national teams of Canada, New Zealand, Estonia, Kazakhstan, Turkey, and, for the first time, African continent – Egypt have joined the daily trainings of our rhythmic gymnasts preparing for the World Championships to be held in Stuttgart (Germany) in September and qualifying for the Rio-2016 Olympic Games.

As to our gymnasts, the team’s leader Marina Durunda and gymnasts - Ayshan Bayramova, Gulsum Shafizada, Zeynep Celep, the participation of which is planned at the forthcoming World Championships, performed at the rehearsal.

The performances came to an end with graceful exhibitive composition executed by foreign gymnasts participating in the training camp to the music of the great Azerbaijani composer Uzeyir Hajibayli, the soundtrack of the legendary movie “O olmasın, bu olsun” (If not that one, then this one).

Altay Hasanov, Vice-President of Azerbaijan Gymnastics Federation and other members of the Executive Committee visited the dress rehearsal, traditionally held prior to major events and preceded international tournaments.