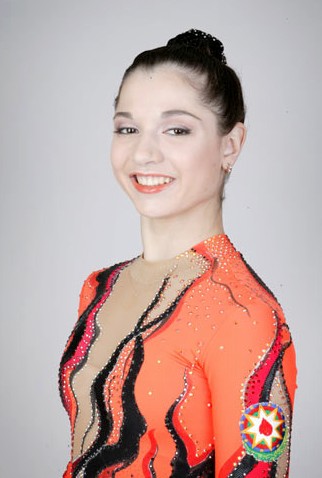 An Azerbaijani gymnast Anna Gurbanova won four silver medals in the international tournament “Spoleto Cup” in Italy.
Having received 64.425 points and taken the lead over Mariya Yushkevich from Belarus, first time she became the second after the performance in the all-round competition. The repeat of the silver success took place in separate finals: with a hoop (15.95), clubs (16.7) and a ribbon (15.9).
“I’m satisfied with my performances and results. I lost only to Yevgeniya Kanayeva from Russia, but there is no such a big difference in points. The tournament is strong and interesting; it’s always pleasant to perform here. And Zeynab did good, reaching the three finals,” Gurbanova said.
Having taken the 5-th place – 14.45 points, Zeynab Javadli gave her best result with a ribbon in the final. She became the 7th with a rope (14.45) and a hoop (14.3), and with 58.225 points took the eighth place in the all-round competition.
The press service of Azerbaijan Gymnastics Federation informs that other sportswomen of the country, Aliya Garayeva, and also Vafa Huseynova, Anna Bitiyeva, Valeriya Yegay, Alina Trepina, Anastasiya Prasolova and Anastasiya Makarova, which are members of a group team, will take part in pre-Olympics test-tournament in Beijing on the 5-7th of December. Gymnasts (one from each participating country) and group teams, gained licenses for participation in Games-2008, will gather in the capital of the next Olympic Games.
The international tournament in acrobatic gymnastics will take place in Minsk within the same period, where our woman’s pair Ayla Akhmadova – Dilara Sultanova will perform.
Meanwhile, Azerbaijani 7th championship in tumbling (jumps on the acrobatic track), devoted to the memory of the founder of Baku gymnastics school, an honored coach Javid Amirov, has come to the end in the capital. Over 30 jumpers, representing Baku gymnastics school, “Tahsil” and Davachi, took part in the tournament. All winners were defined according to the results of the all-round competition.
Having received the highest - 101.7 points in total of somersault, screw-like and mixed exercises, Hafiz Rzayev became the country’s champion among masters of sports. The silver medal was won by last year’s champion, Said Salimov (99.2), the bronze medal – Timur Odushev (89.6, all from the gymnastics school).
Nabi Mirzaliyev (26.96) and Narmina Minegulova (27.3 points, both from the gymnastics school) became the best among the candidates for master of sports. High results in the first grade were given by other alumni of the gymnastics school, Jalal Azizli (27.62) and Sevda Nasrullayeva (27.28).
In the second grade, the gold medals were won by Ismayil Hajizada (27.19) and Aytan Shukurova (27.03), also representing the gymnastics school.
Finally, Farid Iskakov (26.36, gymnastics school) took first place in the third grade.
Summing up the championship, Arif Gafarov, the head coach on tumbling, noted the sportsmen’s mastery level. Davachi jumpers didn’t perform bad, but they didn’t reach the pedestal. In one word, he said this kind of gymnastics was progressing, gaining popularity not only in Baku, but in regions as well.