GARAYEVA IS THE BRONZE MEDALIST OF THE WORLD GAMES 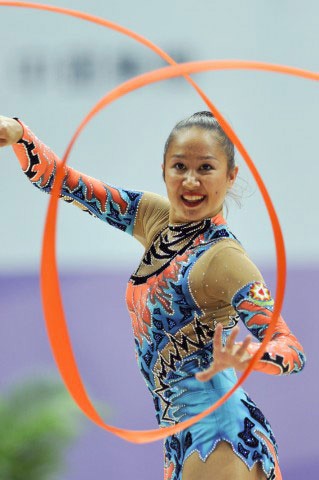 An Azerbaijani gymnast Aliya Garayeva has won the bronze medal at the 8th World Games in Kaohsiung (Taiwan).

According to the press service of Azerbaijan Gymnastics Federation, the third place was taken in the final of the exercise with a ribbon. Having received 25.25 points from the judges, she lost only to the competition’s absolute leader Yevgeniya Kanayeva from Russia and Anna Bessonova from Ukraine.

“I must admit that my performances had not been so good at the beginning of the Games. A rope and a ball did not obey me and the same was with a hoop. I took the 9th, 10th and 11th places as a result and those places did not enable me to continue the contest in the final. But the next day, I was able to make happy my fans with my performance. I am very glad that my only final with a ribbon brought the first medal to the team’s medal box at the Games,” Garayeva stated.

The country’s second gymnast Anna Gurbanova also gave her best result with a ribbon – 24.825 points and won the fourth place. Anna took the 5th place in the final with a ball, the 6th – with a rope, and, according to the qualification performances’ results with a hoop, Gurbanova became the 9th.

The competitions in acrobatic gymnastics are starting at the World Games today. Azerbaijani women’s pair, consisting of Ayla Ahmadova and Dilara Sultanova, will begin their performances in the qualification with balance exercise.