GIMATOVA AND SHAMILOVA – THE SILVER MEDALISTS OF THE TOURNAMENT IN KAZAN 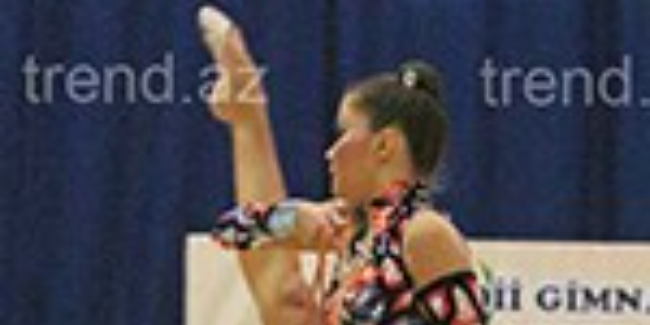 Azerbaijani gymnasts Dinara Gimatova and Leyla Shamilova became the silver medalists of the international tournament held in Kazan.
In the all round competition the bronze medalist of the European and 2007 World championships received 71.575 points, which qualified her for the silver medal.
This is a very interesting and well organized tournament said Gimatova in her interview to the press service of Azerbaijan Gymnastics Federation. People love and understand gymnastics in Kazan, that’s why it is always very pleasing to perform here and particularly to become an award winner in the company of Russian gymnasts. I also congratulate Leyla who won the second silver medal for our team.
Leyla Shamilova, performing in her age group, was not very happy after her first two performances – with a ripe and a hoop. And it was understandable – she received very average marks. However, they were followed by higher ones for her performances with clubs and ribbon.
Leyla won the second place in the final rating just after the Latvian gymnasts – 58.375 points, and was gladly signing autographs and posing for photo cameras on her way to the mix zone.
As to the performances of our three other gymnasts, two of them Jannat Mammadova (35.025) and Aisha Mustafayeva (59.075) got their places among the first ten, having taken the 8th and 9th places respectively. Nargiz Aliyeva became the 13th with 77.425 points.
The upcoming week end is also rife with the gymnastics tournaments. The Austrian city Innsbruck will host the final Grand Prix tournament and an international one for the junior gymnasts.
The European champion Aliya Garayeva and a bronze medalist of the European Championships and 2007 World Championships Anna Gurbanova will compete with other celebrated gymnasts of our time, and a young and promising Nigar Mirzayeva will perform at the tournament for juniors.
Gymnastics celebration “Happy Cup 2007” will be held in another European city – Belgian Gent. A bronze medalist of 2007 World Championships Zeynab Javadli and young Nigar Abdusalimova and Ekaterina Prokopenko will leave for that city which retained many remarkable architectural sights of the middle ages.