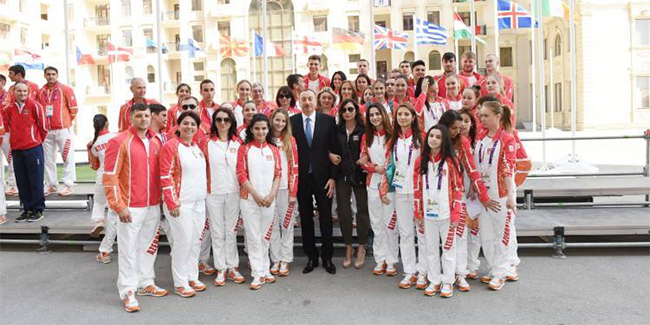 A few days left before the start of the first ever European Games in Baku. Since ancient times, cordial and always hospitable land of Absheron peninsula, will receive the contingent of the continent from the Balkans and the Pyrenees, the Apennines and Scandinavia, as well as from other parts of the Old World within ultramodern sports arenas of the capital and Mingachevir.

Elite Games implies inclusion of elite sports into its program, one of which has always been and will be gymnastics. Azerbaijani gymnast, who are as many as 27 people, will take part in six gymnastics disciplines at the European Games.

A careful and regular reader knows that since the end of last year, Azerbaijan Gymnastics Federation launched a project dedicated to the European Games where it posted information regarding upcoming competitions and interviewed potential and prospective participants of June contest.

Questions of the interview reminded questionnaire once, so answers of the respondent athletes were similar in many ways. Rhythmic gymnasts Marina Durunda and Ayshan Bayramova, as well as artistic gymnasts Oleg Stepko and Eldar Safarov, acrobats and athletes representing trampoline and aerobic gymnastics told how their parents took their hands and brought them to gymnastics sections and what came of it, modestly spoke about the main goal which was to represent Azerbaijan with dignity at the Games. By approaching closer to the European Games and participating in various high-ranked tournaments and holding dress rehearsals, the last of which took place last Saturday at Milli Gimnastika Arenası (National Gymnastics Arena), it becomes clear that the level of preparation of Azerbaijani gymnasts is high. As it was mentioned by Altay Hasanov, the Vice-President of Azerbaijan Gymnastics Federation "the main thing we wish you and all our other athletes is to approach to the Games without any injuries and successfully perform on the homeland - the Land of Fire!"

The torch lighted in the ancient "Ateshgah" temple is already in Baku. It will be carried by more than 100 famous athletes, including an Ambassador of the European Games Marina Durunda and a living legend of artistic gymnastics Valeri Belenki in the capital of the Games. According to 46-year-old Olympic champion from Barcelona-92, who especially came from Germany where he successfully worked as a coach the day before, "to carry the torch along the streets of the native city is always a great honour and responsibility."

This week is saturated with various events. Gymnastics team with all the coaching and technical staff is moving to the Athletes’ Village on June 11, and a day later podium training is commencing. On June 12, we will witness an unforgettable Opening Ceremony at the Olympic Stadium. Already on June 14 and 15, Milli Gimnastika Arenası will open its doors for the audience of the first two gymnastics disciplines of the European Games - women's and men's artistic gymnastics. The floor will be at disposal of rhythmic gymnasts, acrobats, athletes representing trampoline and aerobics on June 17. The finals in all six gymnastics disciplines will be held.on June 18-21.

Tickets for gymnastics competitions are not so expensive - 3-5 manat only, which is significantly less than the ticket prices for the world's major tournaments. In one word, come to support and cheer our sportsmen. After all, they need your support, your presence on the stands is important for them. Do not miss this festival of sports and support your athletes. Go ahead, Azerbaijan!