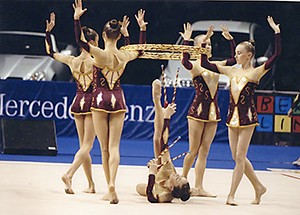 The World Cup lap in rhythmic gymnastics, where gymnasts from 42 countries of the planet were taking part, has come to the end. The contest in group exercises took place within the framework of the tournament for the first time.

Azerbaijan was represented by a European champion Aliya Garayeva, a bronze medalist of the European and World championships in a team event Anna Gurbanova and by a team in group exercises – Vafa Huseynova, Anna Bitiyeva, Valeriya Yegay, Alina Trepina and Anastasiya Prasolova.

On the first day of the competitions, having received 28.625 points, our gymnasts took the seventh place in group exercises of the all-around. The first place – Italy, the second place – gymnasts from Russia, and the third place in the fixture list was taken by hostesses of the events.

Aliya Garayeva, who received 69.5 points in the all-around, shared the 7th – 8th places with a gymnast from Kazakhstan Aliya Yusupova. Anna Gurbanova became the 14th with 65.6 points. It should be mentioned that they were competing with the world’s 54 strongest gymnasts. And Olqa Kapranova (Russia) won the first place, Anna Bessonova (Ukraine) became the second, the third place – Vera Sesina from Russia.

Garayeva and our group team performed in separate finals on the last culminating day of those bright competitions.

Group teams were the first which appeared on the floor of Kiev Sports Palace. Having received 14.5 points, our collective won the 6th place in exercises with 5 ropes. Our gymnasts took the 5th place with 15.6 points in the combination with 3 hoops and 2 pairs of clubs. The gold medals were won by gymnasts from Russia in both performances.

Having received 17.4 points, Garayeva shared 6-7places with her namesake from Kazakhstan Yusupova in a final performance with a rope. With a hoop Aliya became the 6th with 17.525 points. In the judge’s minutes, A.Garayeva also took the same place in exercises with clubs (17.65). Finally, our gymnast took the seventh place in exercises with a ribbon (16.6). A Ukrainian Bessonova celebrated the victory in all the finals.

It should be mentioned that the ambassador of Azerbaijan in Ukraine, Talat Aliyev, and the members of the Youth Committee of the Azerbaijanis’ Congress in Ukraine came to support our sportswomen.

The tournament in Kiev has proved the truth again that the rhythmic gymnastics - is a beautiful kind of sports, however, it’s quite subjective where a lot still depends on judges’ positions.