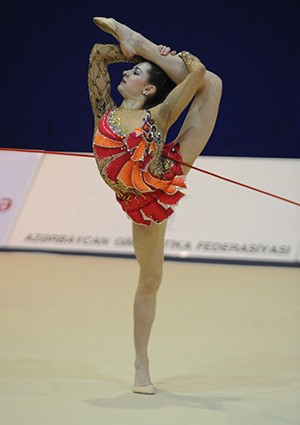 An Azerbaijani gymnast Anna Gurbanova has won the gold medal at the international tournament in commemoration of Gorenkova held in Omsk.

According to the press-service of Azerbaijan Gymnastics Federation, she took the first place in the final with a rope having demonstrated a faultless performance and taken the lead over the World Champion-2010 D. Dmitriyeva (Russia) and an Estonian A. Makushina.

“Thank you for your congratulations! I can say that my performance with a rope was wonderful. As to other apparatus and in the all-around, I stopped just a step away from the bronze medal having taken the 4th places. This tournament was the last one for me this year, and it was good that it went off in high spirits. After a short recess, I, together with my coach, will start to prepare for the next season,” Gurbanova said.

All the thoughts of our other gymnast Aliya Garayeva, who has successfully completed the year as well, having performed in the final of the Italian “Serie A” Championships in Turin, are also associated with the season-2011. Representing the “Ritmica Piemonte” team, Garayeva was competing in the Serie A2. According to the final’s result, her team took the 2nd place and acquired a right to perform at the strongest series next year.