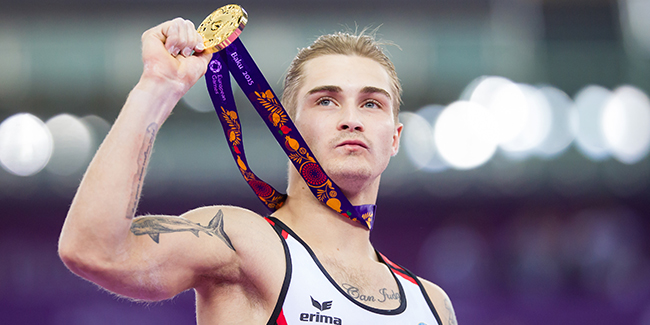 Having demonstrated perfect performance on his best apparatus – parallel bars – Oleg left behind his all strong rivals like a European Champion of 2013, David Belyavskiy from Russia, and not less famous rival Marius Berbecar from Romania, and won the gold medal. The whole hall was cheering a real fighter, and were singing the National Anthem of Azerbaijan with tears in their eyes!

But it is not the end!!! Today, Oleg has won the “silver” for the exercises on pommel horse and the “bronze” on vault. Thus, Oleg brought a whole set of medal to the country, having demonstrated gymnastics hat trick! Incredible set in history of the 1st historic European Games!!!

His performances were watched personally by President of the Republic of Azerbaijan, Mr. Ilham Aliyev, and, his spouse, the Chairman of the Organizing Committee of the 1st European Games, President of Azerbaijan Gymnastics Federation, Mrs Mehriban Aliyeva, who also took part in the Awarding Ceremony.

So, Oleg has become five-time medalist of the European Games in Artistic Gymnastics!

We congratulate the whole gymnastics community on this splendid success!