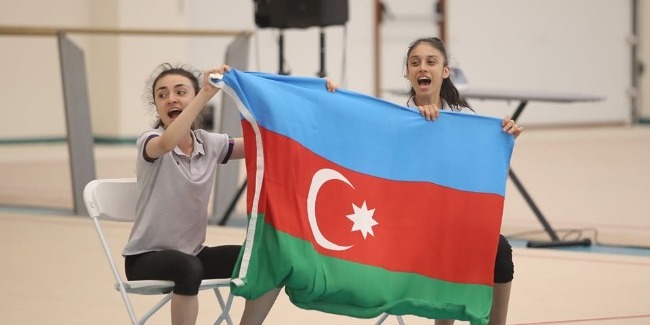 The first very interesting joint online contest between the Azerbaijani and Israeli National Teams in Rhythmic Gymnastics has taken place.

Yesterday, the teams of both countries, which qualified for the Tokyo 2020 Olympic Games, participated in the contest called “battle”.

Before the start of the competition, both teams were introduced to each other. Members of the Azerbaijani "Pakhlava" and Israeli "Bamba" teams wished each other successes. Afterwards, information about the rules of the contest followed.

The competition, consisting of 3 parts and lasting about 3 hours, was exciting and pleasant not only for the teams taking part in, but also for viewers. In the battle beginning with relay games, the gymnasts should have completed the game within a certain period of time. In addition, they executed various exercises with apparatus. The teams received points from the judges evaluating the performances.

In the end, the members of both teams answered the questions about Rhythmic Gymnastics.

Although the performances were scored, both teams were announced the winners as the purpose of the competition was to experience the competition spirit at quarantine period and to have fun together, even online, when there are no gymnastics competitions.

The coach of the Israeli team Rachel Faiga also thanked the Azerbaijani team for organizing and participating in such a competition and wished successes to our team.

It should be mentioned that the competition, which was broadcasted live on both the Facebook page and YouTube channel of Azerbaijan Gymnastics Federation, was watched with great interest.