In memory of friend... 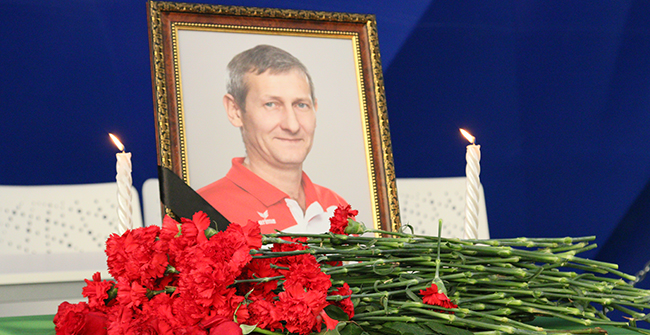 This is not just another press release of Azerbaijan Gymnastics Federation; unfortunately, this is an obituary.

Always being terse and slightly pensive, sporty-taut and disapproving sluggishness in everything, he was exigent and at the same time, he was affectionate paternally with all his students. Both with those, whom he knew from an early age and even with very small girls, who just started to learn the basics of gymnastics. He was the Coach who has held first Baku Championships in artistic gymnastics among girls and this tournament has given hope for a brighter future of the national women's gymnastics. And we believe that it will be so.

Aleksandr Pravdin was appointed Head Coach of the National Team at the end of last year. His method of teaching and training, dedication, love of work gave us hope for the highest results. Indeed, after his appointment as the Head Coach, a sharp jump was observed in the women's artistic gymnastics. We were proud to work with such well-known mentor, as Aleksandr, and we wanted to enjoy our successes together repeatedly.

He loved his family, took care of and protected them. Becoming Head Coach, he moved to Baku with his family. His wife Nina, who adored him, helped to work in a team, and his daughter Kristina, who had gone in the footsteps of parents, became an absolute champion of Azerbaijan in March this year, and later, under the guidance of her father, she won the silver medal at the World Challenge Cup in Germany.

Aleksandr Pravdin was born in 1970 and from a young age, he was involved in gymnastics. After completing a career, he moved on to coaching. He worked for many years in the Voronezh Gymnastics School, taught kids and raised well-known athletes.

In addition to all sporting achievements, Aleksandr Pravdin was excellent companion for all of us, a very educated man, a real intellectual and interesting conversationalist. In his spare time, he was fond of mathematics. He thought math was the most interesting science. Who knows, maybe he was going to do something great, combining science and sport?!

In recent months, Alexander Yuryevich plunged into trainings, preparing the team for the European Championships and the European Games.

His death shocked us - all workers of the Federation, athletes, coaches and sports community.

Today, he was laid to rest in his native Voronezh. There was funeral atmosphere in gymnastics hall in Baku, where he worked his last days. Pravdin was commemorated at the National Gymnastics Arena, where musical accompaniment of all trainings were canceled today.

We are mourning with the family of Aleksandr Pravdin, sharing with them this sorrow.

We will miss you, Alekander Yuryevich...