In the spotlight or an effect of the podium training 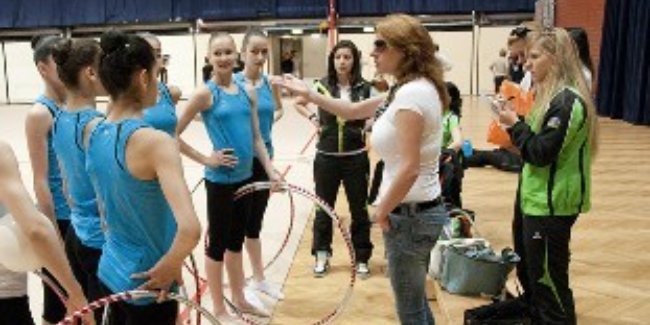 Azerbaijani National Rhythmic Gymnastics Team has held its first trainings in Vienna where the European Championships will start on May 31.

There are just few days left before the event’s start and the team already feels its atmosphere in full. Moreover, the heightened attention of the most specialists is namely being compelled on our gymnasts who are going to compete for the European Championships’ medals.

According to the regulation, each team has a right for a podium training before the tournament, i.e. an opportunity to perform their program on the event’s main arena. Meanwhile, there were many teams, who, with the appearance of the Azerbaijan National Team on the floor, concentrated all their attention on our gymnasts. The training session was successful and the athletes looked confident, but, now, the most important thing was to transfer this confidence into the performance at the Championships.

As to the Championship itself, 33 countries will take part in it and the gymnasts will compete for the medals in the individual, team and group events. By the way, there was a time when Vienna hosted the European Championships where Azerbaijani gymnast Natalya Bulanova took part in. Now, she is in Vienna again but as the international judge this time. The upcoming start will be representative for our team in many ways. It is the first year of the junior team consisting of Gulsum Shafizada, Nilufar Niftaliyeva, Aliaksandra Platonova, Emilya Bagiyeva, Sabina Hummatova and Aynur Mustafayeva while Marina Durunda and Lala Yusifova performed among junior individual gymnasts not long time ago and they had now being continued in the senior category.

The hall, where the competitions to be held, is almost ready for the competition. The flags are hanged, the podium is ready, sofa is shining white where a gymnast and her coach wait for the score after the performance. It`s interesting that they call it "kiss&cry corner". It means that waiting is always exciting for the gymnast and when she sees the scores of the judges on the screen, sometimes it is hard both for her and coach to keep their tears. We hope the Championships will bring only the most positive emotions to our gymnasts.