IT IS BETTER TO PERFORM FIRST THAN NEVER 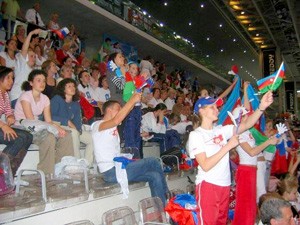 The events among seniors, who were defining the continent’s new overall champion, were held in Turin in the evening on June 6, where the 24th European Championships in rhythmic gymnastics were taking place. We say the new, as the winner of Euro-2006, a Russian Vera Sesina, was not presented for this championship.

Nobody wants to perform first in gymnastics. They say this is a bad sign. But the fate decreed that Evgeniya Kanayeva from Russia would perform first. Kanayeva, regarded as the second best gymnast in the team after highly experienced Olga Kapranova, completed this gymnastic marathon consisting of 4 performances first having received the highest points: she received 19.05 points for the performance with clubs. By the way, it happened for the first time as well.

The last years’ two overall world champions, Anna Bessonova from Ukraine and Kapranova, were competing for the “silver” at once, in which a new made European champion was not interested any more. The winner of Patras-2007 turned out to be more successful, who took approximately 0.5 points lead over the winner of Baku-2005.

Having received 71.8 points in the total of the all-around, an Azerbaijani gymnast Aliya Garayeva became the fifth after a Belarusian gymnast Inna Jukova. It should be noted that she had become the fifth in the all-around during the last world championships in Greece as well.

The second representative of Azerbaijan Dinara Gimatova took the 11 place – 66.75 points. 21 gymnasts in all performed in the tournament among seniors.

Tomorrow is the concluding day in Euro-2008 with the finals among juniors and groups, closing ceremony and indispensable Gala-concert. Our group consisting of Vafa Huseynova, Anna Bitiyeva, Valeriya Yegay, Alina Trepina and Anastasiya Prasolova will perform in both finals: with 5 ropes under a sequence number 2, and with 3 hoops/4clubs – under sequence number 5.