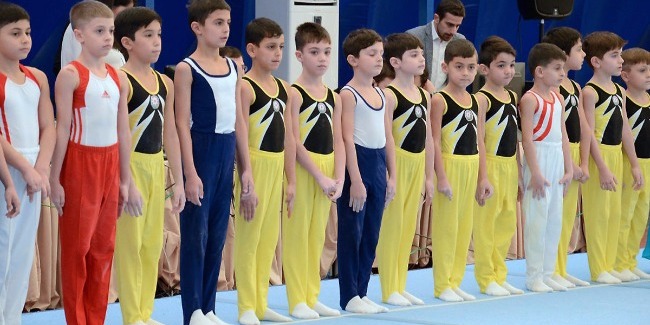 Two-day competition has come to an end with the performances of men’s artistic gymnasts. The athletes divided in 6 age categories were competing in the all-around to identify the strongest ones. The representatives of Baku Gymnastics School, Republican Olympic Sports Lyceum and the city of Sumgayit managed to mount the podium.

It is remarkable that along with the gymnasts who repeatedly became the prizewinners of local events, there were little athletes experiencing a thrill of competition for the first time. Approaching the apparatus with excited eyes, execution of basic but still very difficult elements for them encouraged the athletes to perform with more confidence. Although if they were sometimes worried of mistakes made, will to win never left them until the last moment. Of course, the determined execution of exercises of young gymnasts made proud their parents who came to support their children. The coaches were watching the routines of their gymnasts with great excitement, trying to help them.

The 24th Artistic Gymnastics Baku and Azerbaijan Championships among Age Categories held within the framework of the first joint competitions of new season came to an end remembered with its exciting moments.

We congratulate all the prizewinners and wish each gymnast tirelessly to follow the way to the victory.

Detailed information about the results of the tournament is available on the federation’s official website (events section).