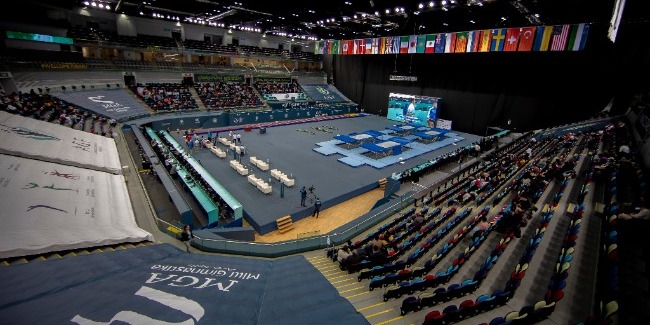 The calendar of Azerbaijan Gymnastics Federation will be saturated with international events in 2020 as well.

Thus, next year, the  Federation will host 8 international competitions including European and World Championships.

First of all, international competitions will start with the World Cup in Trampoline gymnastics and Tumbling qualifying for the Olympic Games. According to the provisional registration list of this competition to be held on February 15 & 16, 27 countries have already confirmed their participation. The attendance of more than 400 participants including appropximately 238 gymnasts and other delegation members is expected in the events.

According to the provisional registration list, there are 48 countries which wish to take part in the World Cup. About 760 participants including 321 gymnasts and other delegation members will visit Baku to attend these competitions.

It should be mentioned that the competitors of the Rhythmic Gymnastics World Cup will get a chance to be qualified for the Games. The provisional list of this competition will be available in December.

In May, Azerbaijan will host the other large-scale international events. Although Aerobic Gymnastics has been developing in our country since the end of 2013, the FIG World Age Group competitions (May 8-10) and the FIG World Championships (May 14-16) have been entrusted to Azerbaijan in 2020. It should also be noted that there was successfully held Aerobics European Championships in May of 2019 for the first time in Baku.

On May 27-31, there will be organized Men`s Artistic Gymnastics European Championships in our country for the first time. This event, which will bring together the strongest athletes of the continent, will also be the last qualifying competitions for the Men's Artistic gymnastics events at the Olympic Games to take place two months later.

So, do not miss our events if you wish to witness the exciting and spectacular performances of the star athletes of the world gymnastics, to have a good time with your family and loved ones at the MGA and become a part of the gymnastics festival.

More information about the competitions can be found on the Federation's website (https://agf.az/az/competitions/).