JUNIOR GROUP TEAM – IS THE 4TH IN THE ALL-AROUND 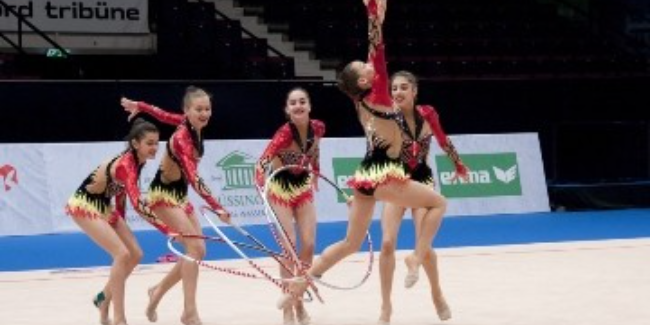 According to the press service of Azerbaijan Gymnastics Federation, all attention was compelled on junior team in group exercises which performed again with 5 hoops in the morning session. On the first day, the team showed the fourth result and should have performed as better as possible to compete for a place in the top three. Results of two days are summed up then medalists in the all-around are defined. And our team greatly performed its exercise having received 16.075 points from the judges. This result enabled them to become the second after Bulgaria but there still were rivals to perform. The teams of Russia and Belarus appearing on the floor later received 16.816 and 16.25 points accordingly having taken the first and second places. Bulgarians won the bronze and our team took the high 4th place.

However, the team still has a chance for a medal as the top eight teams qualified for the finals on June 2.

Marina Durunda and Lala Yusifova will compete in the evening session. First, they will execute the compositions with clubs, and then – with a ribbon. The girls will compete to qualify for the individual finals and the results of the senior gymnasts will be summed up and define the team competitions’ medalists. For the time being, the national team is on the third place and has a chance to compete for medals.

It should be reminded that Durunda reached the finals with a ball and a hoop on the competitions’ first day.