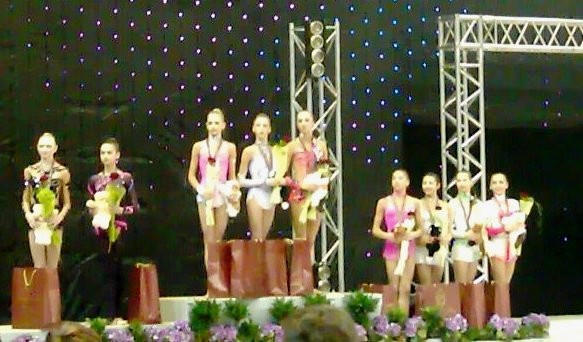 Azerbaijani gymnasts have taken the third place in a team competition at the international tournament among juniors held within the framework of the World Cup series in Kiev!
According to the press-service of Azerbaijan Gymnastics Federation, bronze medals and diplomas of the third place are brought to Baku by Mansura Bagiyeva and Yekaterina Prokopenko (both born in 1997), as well as by 14-year-olds Gulsum Shafizada and Nilufar Niftaliyeva. Russian gymnasts won the gold medals and “silver” remained within the borders of Ukraine. According to the national team’s head coach Mariana Vasileva, 23 teams took part in the event in total.
“I am content with the junior gymnasts’ performances. They have raised their results almost for 2 points within a month.  Most specialists expressed their positive emotions with regard to our juniors and it inspires us! Many people were also complimentary about Lala Yusifova who participated at the World Cup series dedicated to the 80th Anniversary of a legendary coach Albina Deriugina. Unfortunately, Lala passed the tournament distance with roughness. And her participation at the competitions of such a level for the first time also had an impact on her performances. For example, she skillfully executed an exercise with a ribbon but she failed to reach the final due to the mistakes made with clubs and a ball,” the Bulgarian specialist summed up.
Our junior gymnasts have returned from another event with a medal mood – from the tournament for the prizes of an Olympic prize-winner Yana Batirshina held in Moscow with a participation of more than 400 sportswomen from Russia and Azerbaijan.
A 12-year-old Rugiyya Sattarova became the bronze medalist among the gymnasts of her age. Our second participant Leyli Ibrahimova (born in 2001) won a victory with a ball in her age group and an 8-year-old Lala Kramarenko – was the bronze medalist without apparatus.
In addition, Sattarova also was awarded with a prize for “The most complicated exercise”, and Ibrahimova received a cheque from the hands of the competitions’ organizer for sewing of an exclusive leotard.
As to next tournaments, our gymnasts will compete in the events in Budapest and Poland during the Novruz Holiday’s celebration. M.Bagiyeva, Y.Prokopenko and a 12-year-old Zhala Piriyeva will set out for the homeland of a famous Hungarian composer Ferenc Liszt. And N.Niftaliyeva, G.Shafizada, as well as Zuleykha Ismayilova (born in 2000) will go to the homeland of another well-known composer Frederic Chopin.