KIEV DEBUT TURNS OUT TO BE SUCCESSFUL 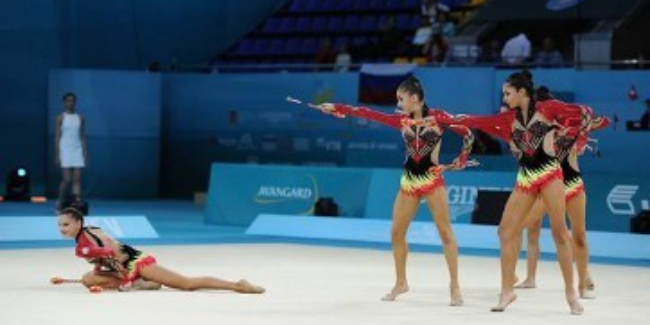 The event was special in all senses as there was a natural alternation of generations after the Olympiad. Seven of eight of our athletes were making their debut at the World Championships, but, nevertheless, they didn't lose their heads during the competitions. Marina Durunda took the fifth place with a ribbon and reached the all-around final together with Lala Yusifova while the Azerbaijani group team consisting of Sabina Abbasova, Irada Ahadzade, Mansura Bagiyeva, Sabina Garatova, Siyana Vasileva and Aliya Pashayeva became the seventh in the all-around having showed the sixth result with three balls and two ribbons.

Even prior to the competition, Durunda and Yusifova were paid some portion of compliments by experts having backed them by appropriate results. It should be understood that it was the first World Championships for our gymnasts who have just past the junior age. And the fact that both athletes were among the strongest in the all-around, already shows a lot. For comparison, we would like to note that Azerbaijan was represented only by Aliya Garaeva in the all-round final at the planet’s last Championships where she was qualified for the Olympic Games. If the present event was a qualification for the Olympiad, Durunda and Yusifova would have been qualified for the Games as an overwhelming majority of their main rivals competing in Kiev performed at the Games in London where they were in final ten.

And the Azerbaijani group team perfectly proved itself in the all-around and the seventh position was another evidence of it. In the meanwhile, according to the ranking list, the team left behind Ukraine, Japan, Germany and Greece, which had participated at the Olympiad. Thus, the group’s gymnasts, as well as individuals, have improved their results in comparison with the previous World Championships, where they were the thirteenth. They have deservedly reached the final with three balls and two ribbons.

And the World Championships was concluded by a Gala where all our gymnasts performed and they were greatly met by the audience. Fans strongly supported the team and it can be said that it gained an unofficial prize of the spectators’ sympathy in Kiev.