Lala Yusifova - the bronze medalist of the World Cup in Bucharest 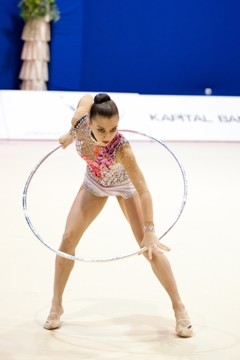 An Azerbaijani gymnast Lala Yusifova has won the bronze medal of the World Cup held in Bucharest this week-end.

According to the press service of Azerbaijan Gymnastics Federation, the 17-year-old athlete from Baku qualified for the final of an exercise with a hoop where she took the third place. She became the 7th in another final with a ball, and the 8th in the all-around.

Her teammate Marina Durunda didn`t manage to win a medal in Romania, but she competed in all 4 finals and showed the best result in the all-around and with clubs - the 6th places.

The 14-year-old Veronika Omarova, who competed in the international tournament among juniors within the framework of the World Cup, won the silver medal, losing to a Russian participant and leaving behind a Ukrainian athlete of the same age.

"And our another junior gymnast Zuleykha Ismayilova (born in 2000), who competed in the tournament held in Konya, Turkey, became the all-around winner", - added a head coach of the National Team, Mariana Vasileva. " Last week was very successful, and, recurring to the World Cup, I would like to note that Lala was looking so good with a ball that the local television broadcasting the competitions, asked her to demonstrate the same exercise at the Gala. And, naturally, Marina becomes more confident with every start before the upcoming Austrian Euro-2013. And, together, they are a very strong tandem, the fans love them and the judges treat them with a grain of sympathy."

Moreover, the flag of Azerbaijan was proudly fluttering among the participating countries in the final of the "Alina-2013" international festival held in Moscow. According to the Olympic Champion of Athens-2004, her charitable fund celebrates its 5th anniversary this year and the Azerbaijani team consisting of Ayshan Bayramova, Sabina and Samira Alizada’s, Narmina Huseynova, Zeynab Hummatova, Fatima Bairamova, Jannat Mammadova, Madina Ahmadova and Simara Jafarova, was also invited to the spectacular show with the participation of the variety celebrities.