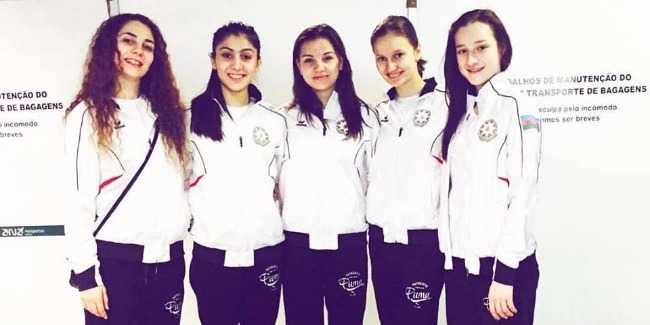 The Rhythmic Gymnastics World Cup has been held in Portuguese Lisbon city on March 18-20.

In the events, Azerbaijan was represented by the team in group exercises, as well as by an individual gymnast.

The group, consisting of Siyana Vasileva, Aliaksandra Platonova, Diana Doman, Ayshan Bayramova and Elif Zeynep Celep, which is preparing for the April’s Pre-Olympic Test Event in Rio de Janeiro, took the 8th place in the all-around. Having reached the final with 5 ribbons, the group ranked 7th.

The girls demonstrated their new program on the international arena for the first time, while individual gymnasts Ayshan Bayramova and Elif Zeynep Celep made their debut in group exercises.

Gymnast Zhala Piriyeva, who commenced to execute her routines on senior program this year, became the 19th in the all-around.

The next event for the team in group exercises will be the Grand Prix in Thiais (France, March 26-27), to be also joined by the national team’s leader Marina Durunda.