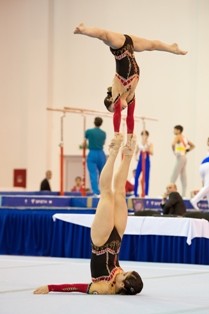 Azerbaijani women’s pair in acrobatic gymnastics - Aynur Huseynova and Narmin Ramazanova - has become an all-around winner of the international tournament among juniors held within the framework of the World Cup Series in Portuguese Maia!

According to the press service of Azerbaijan Gymnastics Federation, after the performance of balance and dynamic exercises, our pair had been taking the leading positions among other competitors for prizes and awards.

But they failed to bear the palm they dreamt of as the representatives of Baku Gymnastics School came more concentrated to crucial combined exercises. The judges` final results unanimously affirmed the victory of Huseynova-Ramazanova and the decision to give the Maia`s "Gold" to the Azerbaijani acrobats.

The second women’s pair, Lala Huseynova-Khoshgadam Guliyeva, participating in its` age group, also competed in the final, where the girls won the bronze medals.

And, finally, another bronze medal was brought to Baku by men’s pair in acrobatic gymnastics - Elchin Alibayov and Emin Gulmammadli. A participation in the international tournament in Belgium which will be held in the beginning of April is awaiting for them now.