MARINA DURUNDA – IS THE ALL-AROUND CHAMPION OF AZERBAIJAN! 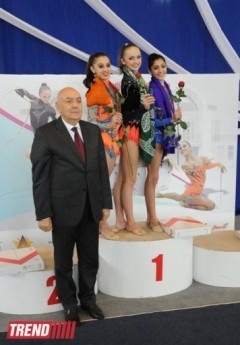 The 20th Rhythmic Gymnastics Azerbaijan Championship has come to an end at the Olympic Sports Complex in Ismayilli.

16 sportswomen - senior gymnasts as well as gymnasts born in 1998-2000 - took part in the competition. Athletes competed both in the all-round and apparatus finals.

Marina Durunda became the new champion of Azerbaijan in the all-round, Lala Yusifova - was the silver medalist and Ayshan Bayramova took the third place.

Durunda also celebrated a victory with a ribbon, a hoop and a ball, but, in an exercise with clubs, the "gold" was won by Yusifova.

Zhala Piriyeva became the all-around winner among junior gymnasts, the second place was won by Zuleykha Ismayilova, and the "bronze" - by Beyza Demir who made her debut at the competition.