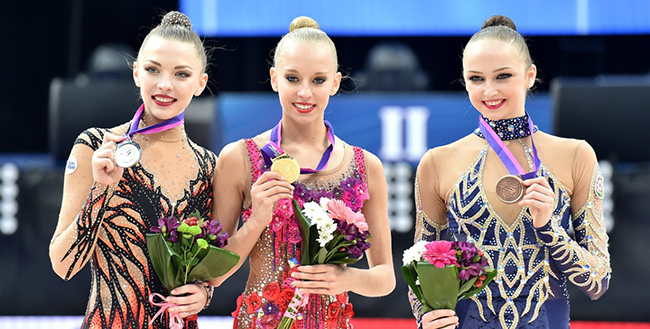 On the final day of competition, Marina Durunda performed in two finals - with a ribbon and clubs. An exercise with the ribbon brought our gymnast third place and the title of the bronze medalist of the European Championships. Marina also ranked fifth after performing with clubs.

Another gymnast Ayshan Bayramova, performing for the first time at such a large-scale competition ranked 16th in the all-around.

A performance of our junior team in the group exercises became not less spectacular. Europe met performance of our young gymnasts with five balls with a standing ovation. It is not surprising because their exercise to the rousing "Smooth Criminal" by legendary Michael Jackson has won the sympathy of rhythmic gymnastics fans since the end of last year.

Reaching the final with the fourth (!) result, our junior team stopped one step away from the bronze medal, finishing fourth.