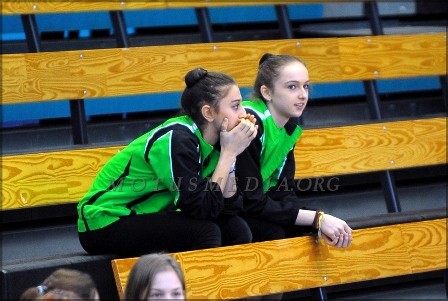 The competitions’ speaker have called to the podium gymnasts came from southern Baku city and warming the local audience with their hot performances - 19 times (!) – at both this year’s and new Olympic cycle’s first World Cup series held in cosy-picturesque Estonian Tartu city where northern cyclone in the form of snow precipitation prevails in February. Having pronounced the word “Azerbaijan” so many times, the speaker articulated it without certain Baltic accent towards the end of the awarding ceremony.

Lala Yusifova could have seized on medal in the all-around. But a mistake made in an exercise with clubs threw her to the 6th place. Though, in the final with a hoop, she undoubtedly deserved the “bronze” and mounted the podium.

Our second participant at the series Marina Durunda was honored with flattering words as well as. She became the third in all kinds of the program, including all-around but except a hoop after a Ukrainian-Belarusian duet Ganna Rizatdinova - Melitina Stanyuta.

According to the national team’s head coach Mariana Vasileva, the juiciest cherry was put onto the slice of festive pie by a junior group performing at the “Miss Valentine” International Tournament.

“The collective, consisting of Nilufar Niftaliyeva, Gulsum Shafizada, Aliaksandra Platonova, Sabina Hummatova, Emiliya Bagiyeva and Aynur Mustafayeva and also preparing for the European Championships to be held in Austria, took the first place in the final with 5 hoops having taken the lead over the teams from Belarus and floor’s hostesses.” 2 other individual gymnasts claiming to participate at Euro-2013 demonstrated excellent performances as well. Thus, Aysha Mustafayeva won a victory in an exercise with a hoop and a ribbon and Mansura Bagiyeva became the best with clubs, the second with a ribbon and the third one with a hoop.

“Junior individual gymnasts also made us glad. Zhala Piriyeva (born in 2000) was honored with the main place on the podium three times (a hoop, a ball, clubs) having become the third just once with a ribbon. A gymnast of the same age Zuleykha Ismayilova took only the second places – a hoop and a ribbon, and, Veronika Omarova (1999), making her debut on the international arena won 2 medals: the “gold with a hoop and the “bronze” with a ball.”

“I think the girls have left good impressions with their new programs and even took the risk of demonstrating many complicated elements. Next event in turn is – tournament in Hungary where we have the right to expect successful results as well,” the head coach summed up.