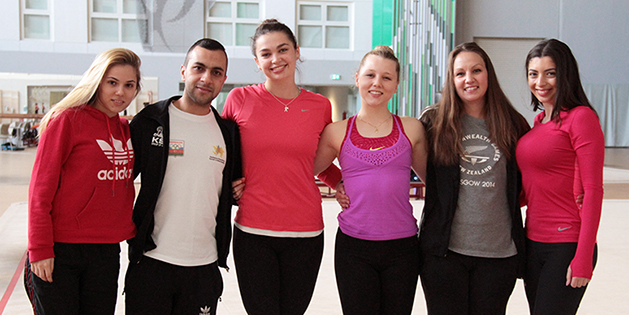 You will never believe it, but New Zealand’s representatives became this week's guest of the National Gymnastics Arena. That is a prime example our Arena is already known throughout the world and eighteen-hour flight is not an obstacle for those who want to improve their skills in rhythmic gymnastics.

Having arrived in Baku for a week to participate in training camp in rhythmic gymnastics, Marnie Sterner and her gymnasts Kelly Macdonald and Lydia Hingston were pleasantly surprised with the conditions created at the Arena and the beauty of our city.

The press service of Azerbaijan Gymnastics Federation interviewed Marnie Sterner, who spoke about her first visit to our capital in 2005, on the development of gymnastics in New Zealand and many other things.

Hello, Marnie! Please, tell about the purpose of your visit to Baku. How did you learn about the training camp at the National Gymnastics Arena?

Actually, our competition season is a little bit later than rest of the world because our national championships is in October and then the girls take summer holiday in December and January. I know it is a bit confusing for other people (laughing). When the girls came back to train in January-February they started to get more serious and I can see that they want to work more. Therefore, we decided to have an extra competition before University Games if they qualified. I talked to my friend Monica Guzman who said it was very good here to come, everything was nice and beautiful, and so I arranged for my gymnasts to come for training camp here. I looked at the schedule in advance to know which competitions were happen at this time. Following this, we are going to Serbia and we really want to improve the technic of the girls, get them to train on a nice carpet near strong athletes.

What you can say about the development of rhythmic gymnastics in New Zealand?

Which upcoming sports events your gymnast are going to participate in? What can you tell about them?

Kelly is hoping to go to University Games; so she needs to try on in Serbia next week. After that, they will trial for World Cups in Sofia and Budapest and possibly another competition in Turkey, and then in June they will trial for World Championships. Kelly is number one in New Zealand; I have been coaching her eleven years, which is a very long time. She is a very strong gymnast, very stubborn, but she is very strong mentally and talented. Her mother passed away year ago, she has been very emotional – up and down all the time. I work with her a lot on this and now we are very close... I do not take the mother’s place, but like mother. I spend more time with her than anyone else. What about Lydia - she came from another city a year and a half ago. She was in a different level last year, moreover, provincial level. Lydia is going to Australia nationals and will compete with them, because obviously it is the next closest country. She will also trial for the World Cups.

What new did you learn during the training camp in Baku?

I have learned a few things regarding technic, which is super important. I am amazed that your gymnasts train eight hours a day. I have just learned a few new corrections for the girls. We also have been practicing with face, expression. Actually, I do try imposing this on my kids, but they say “Oh, I will do this only at competition” and, of course, I get angry with them (laughing). Your coaches have been very helpful with the corrections, technic, with everything.

What are your impressions of the Arena?

It is amazing! You guys are so lucky! You should see our gym – we have one nice carpet, and strips for little children.

As far as we know, you're not the first time in Baku. Has the city changed much since your last visit? What are your impressions?

I think it changed a lot – for the first time I came in Baku for the 2005 World Championships and I have only one or two days out. Things are really modern now, I see the downtown and city center to be extremely modern now. It is multicultural here now, as before it was only Azerbaijani restaurants and now there are sushi bars, Chinese restaurants and so on. It is very cool city.

Do you plan to visit us again?

Yes, I hope so. If all goes to plan, we will come between the end of July and beginning of August.