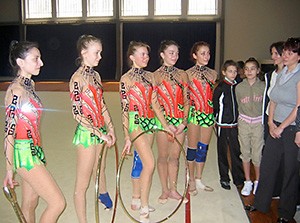 There has never been such a show in Masalli! A splendid show was organized jointly by Azerbaijan Gymnastics Federation and Masalli Sports Complex in this southern town of the country on August 7.

As it was informed before, the group team is holding its final training camp at Masalli Complex before setting out for Beijing Olympic Games.

The singularity of the show lay in that the collective’s coaches held test training in presence of around 350 people gathered in the sports hall. It should also be mentioned that Gazanfar Aghayev, the head of the executive power of Masalli, also watched the training. The team’s tutors, Mariana Vasileva and Natalya Narimanova, tried to approximate the performance in Masalli to the performance in Beijing as much as possible: the time and day of week completely coincided with the time and day of the group’s forthcoming performance in the Olympiad.

According to Manaf Nadirov, the complex’s director, Masalli dwellers can now be proud: they saw the group team’s real Olympic exercises and Gala performances of the member of the country’s national team Leyla Shamilova first on the planet. The audience really created the Olympic climate by waving the banner of Azerbaijan, exclaiming “Azerbaijan” and giving them a standing ovation.

“We advisedly held the test performance on this day and time. We wanted them to feel deeply the atmosphere of the forthcoming Olympic Games and be ready psychologically as much as possible. Thank you for the support. We – the coaches and the audience tried to transmit to them the breath of eastern Beijing through southern Masalli,” M. Vasileva said.

In his turn, G. Aghayev, the head of the executive power of Masalli, expressed his gratitude to all the gymnasts, coaches and medical staff of the team for the unforgettable show and wished them a successful performance in Beijing. He also expressed his confidence that this show in rhythmic gymnastics will serve to the popularization and development of this kind of sports in the southern region of Azerbaijan.