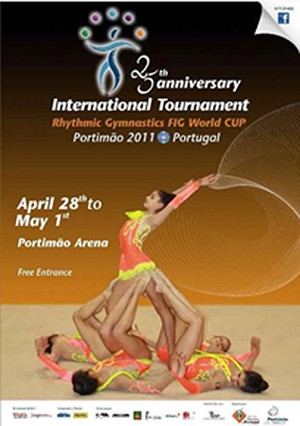 An Azerbaijani gymnast Aliya Garayeva has become a bronze medalist of the World Cup series which came to an end in Portuguese Portimao city.

According to the press service of Azerbaijan Gymnastics Federation, separate finals were held on the competitions’ final day as usual. Garayeva showed the best result in an exercise with a hoop where she won the 3rd place with 27.825 points.

She was left behind only by two Russians – Yevgeniya Kanayeva and Darya Kondakova who took the first places accordingly in all the four finals. As to other apparatus, Aliya won the 5th place with clubs, the 6th with a ball, and the 7th with a ribbon.

According to the results of the all-around, the Azerbaijani national team’s leader took the 4th place losing only to the Russian trio consisting of D. Kondakova, Y. Kanayeva and D. Dmitriyeva. Another Azerbaijani gymnast Anna Gurbanova became the 23rd among 50 competitors in the all-around. The country’s too young gymnasts also continue to demonstrate successful performances. Thus, our sportswomen won 3 medals in the international tournament held in Sherbinka situated near Moscow.

The main award was received by a 10-year-old Zohra Aghamirova who won a victory over the gymnasts of her age in the all-around. And Laman Goyushova (born in 2000) and Zarniyar Aliyeva (born in 2004) became the bronze medalists of the competitions.

Another World Cup series both for individual and group gymnasts will take place in Kiev this week-end (May 6-9). Anna Gurbanova and Zeynab Javadli, a group consisting of Jeyla Guliyeva, Ayelita Khalafova, Sabina Abbasova, Anastasiya Prasolova, Yevgeniya Zhidkova and Stefani Trayanova will perform in hero city, as well as Laman Hajizada and Gulsum Shiafizada will compete in the international tournament among juniors.