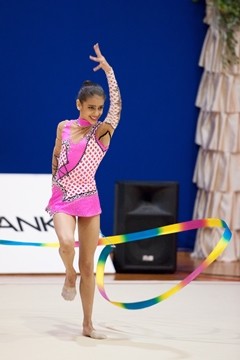 According to the press service of Azerbaijan Gymnastics Federation, three of them belong to a 13-year-old athlete Zuleykha Ismayilova from Baku. At the beginning, she introduced herself perfectly in the exercises with clubs and with a ribbon, and, at the end of the tournament, she became first in the all-around.

The junior group team of the country, preparing for its main and only start of the year - the European Championship which will take place in Austria on May 31th - June 2nd, 2013, performed in Poland as well as the individual gymnast. The silver hoops with tints of blue of Nilufar Niftaliyeva, Gulsum Shafizada, Sabina Hummatova, Aynur Mustafayeva and Emilya Bagiyeva flew over the Polish arena in the course of all 2,5 minutes, allotted for the performance of each group and barely touched the floor to rise up again into the heights. As a result, our girls were recognized as the best ones and deservedly became first both in the all-around and in the final.

According the head coach of the National team, Mariana Vasileva, with each tournament the gymnasts are becoming more confident and the progress in their performances is obvious. "I think, the audience will greet them warmly as well at the Grand-Prix in Thiais this weekend and at the World Cup in Lisbon in early April," she said.