Our artistic gymnasts are coming back to the homeland with medals 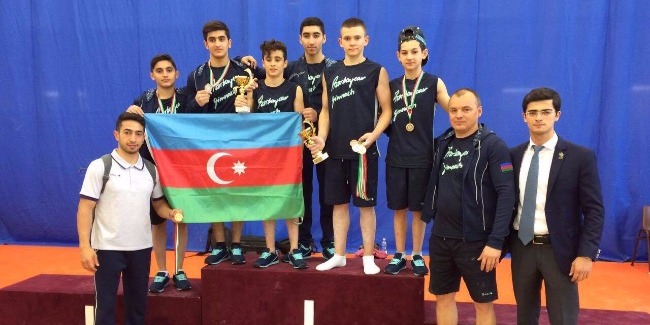 “Budapest Cup” organized in the capital of Hungary has come to an end.

Azerbaijani junior men’s artistic gymnasts were also competing in the tournament along with the 12 countries.

Sarvar Aliyev lost only to Hungarian gymnast in the all-around competition among the age category 1999-2000, and mounted the second step of the podium.

He was also remembered with his successful performances in the apparatus finals. Thus, he won the bronze medal on Rings and the silver one on Parallel Bars.  Our other representative Javidan Babayev showed his best result on Rings and Vault, and won the 4th place in both finals.

In the age category of gymnasts born in 2001-2002, our country was represented by Sergiy  Onbysh, Aghamurad Gahramanov and Samad Mammadli. In the decisive apparatus finals, Aghamurad and Sergiy shared 1st and 2nd places on Floor between themselves accordingly. Also Sergey won the gold medal on the Vault.  His performance on Parallels Bars brought him silver medal. And Sergey won the bronze medal on Horizontal Bar.

Another competitor in the same age group Samad Mammadli showed his best result on Parallels Bars and stopped on 4th place.

Mansum Safarov was the youngest gymnast representing our country in the competition.  Our gymnast competing in the age category 2003-2004 showed his best result on Floor and took the 5th place.