Our gymnasts participate in the "Victory Day" event 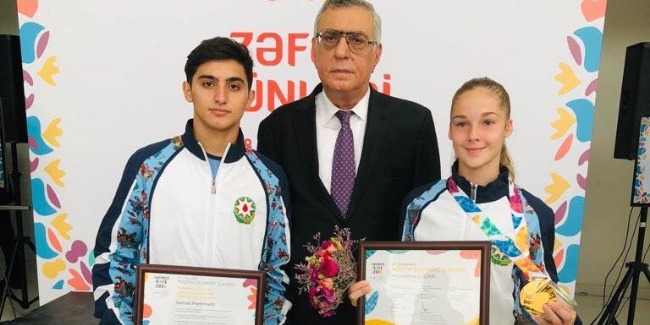 Today, there has been held "Victory day" event dedicated to the athletes who participated in the Youth Olympic Games at National Olympic Committee.

It should be mentioned that the first such event was organised after the Baku 2015 First European Games, and, having become a tradition followed after the Baku 2017 Islamic Solidarity Games. So at this third event, the participants of the 2018 Youth Olympic Games were presented with diplomas and presents.

Among these athletes, there was Yelyzaveta Luzan who represented Azerbaijan in Rhythmic Gymnastics competitions and won the Gold medal within mixed Gymnastics team.

Our representative Samad Mammadli, who competed in Artistic Gymnastics competitions was awarded with a diploma for participation and contribution to the success of the Games.

We, once again, congratulate our gymnasts on the successful participation at the Youth Olympic Games and wish them successes in the future competitions!