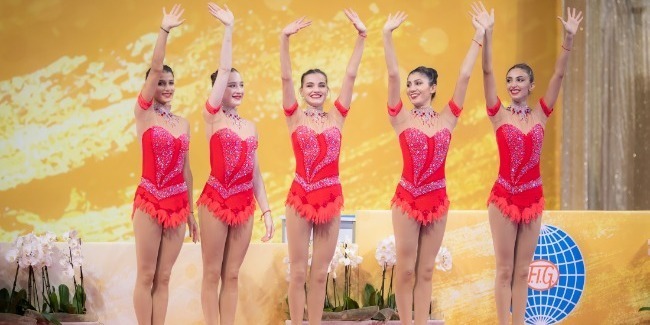 Today, the 36th World Championships in Rythmic Gymnastics has completed its work in Sofia (Bulgaria).

Azerbaijani gymnasts were also among the 36 teams in group exercises competing for the World Championships’ medals. Siyana Vasileva, Aliya Pashayeva, Diana Doman, Ayshan Bayramova and Zeynab Hummatova who had managed to reach the final of both routines the day before, once again, demonstrated their strength on the floor today. Our team`s hoop exercise scored 20.100 points in the competition of the strongest gymnasts. So, they ranked 5th in the World Championships. Our gymnasts` other final performance with 3 balls and 2 ropes brought them the 7th place. The group ranked the 7th in the All-Around as well.

At the closing ceremony, there was a presentation of the FIG (International Gymnastics Federation) flag to Azerbaijan - the host of the next World Championships in Rhythmic Gymnastics. The flag was solemnly presented to Ambassador Extraordinary and Plenipotentiary of the Republic of Azerbaijan to the Republic of Bulgaria, Nargiz Gurbanova, by FIG president, Morinari Watanabe.

During the Gala taken place at the end of the Championships, the members of our National Team managed to win applauses of local spectators for their splendid Gala performance to the Bulgarian music. 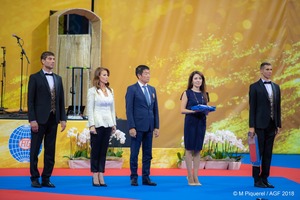 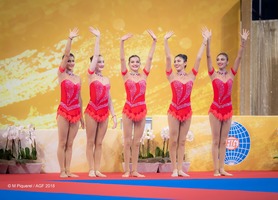 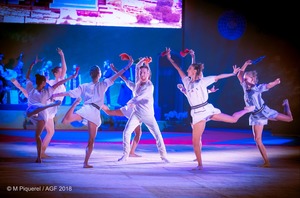