Our trampoline gymnasts completed the Open Slavic Games with medals 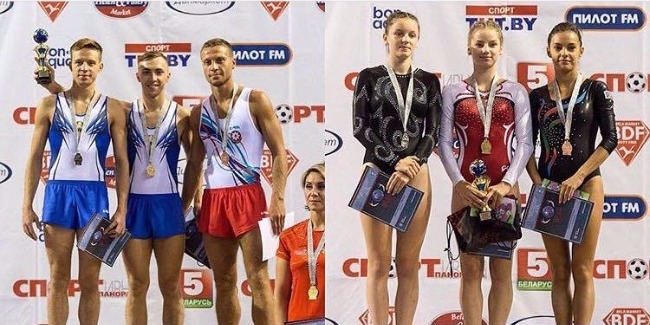 The Open Slavic Games in Trampoline Gymnastics took place in Minsk (Belarus) on August 17-18.  Representatives from 11 countries, including Azerbaijani jumpers, competed in the age categories of 11-12, 13-14, 15-16, 17-year-old gymnasts and elder at the competitions.

Our trampoline gymnasts managed to win the medals both in the synchronised and individual programs. Thus, the synchro pair consisting of Oleg Piunov and Ilya Grishunin lost only to the home pair. Our men’s pair won the silver medal with 49.765 points. Having demonstrated successful performances in the individual program, Ilya also mounted the third step of the podium in the final.

Although our women’s pair Sviatlana Makshtarova and Veronika Zemlianaia failed to win the medals (5th place) in the synchronised program, Veronika ranked within the top three in an individual one and won the bronze medal.

The performances demonstrated by Seljan Mahsudova, the youngest trampoline gymnast in our national team, can be considered as the most remembered ones. Thus, the gymnast, competed in the events among the juniors in an individual program, won her first medal on the international arena by demonstrating the confident performances. Seljan was awarded with the bronze medal of the tournament having received 50.290 points.