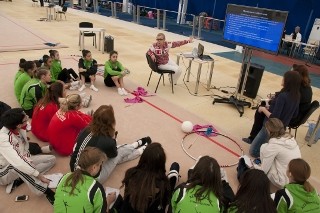 13 participants of Baku courses for coaches in rhythmic gymnastics, organized by the Academy of International Gymnastics Federation (FIG) have received certificates of the 2nd level.

According to the press service of Azerbaijan Gymnastics Federation, the highest result was shown by one of the national team's coaches Yasena Kuyumdzhieva as it was a year ago at the FIG Academy Level 1 also held in Baku. Gabriela Welkow-Jusek from Austria showed the second result, and, finally, Yevgeniya Zhidkova, assisting the head coach of the national team at its facility in Baku, had the third result.

Summing up the seminar, the FIG expert from Germany and the head of the course, Katja Kleinveldt, noted that its goal had been achieved - it was generally aimed at specialists with a little experience, even yesterday's gymnasts, wishing to be fully engaged in coaching activity now.

According to her, many Azerbaijani coaches have improved their professional skills latterly. "It accounts to a large extent for the eagerness of teams from other countries to hold joint training camps in Baku. For example, there were training Kazakh and Hungarian gymnasts on other floors at the same time while we run practical part of our seminar in the hall, and, as I heard, an arrival of a sportswoman from Mexico in Baku was expected," she said.

The representative of Germany also expressed her gratitude to Azerbaijan Gymnastics Federation for the organization and hosting of the courses, which lasted for a week, at high-level. She also did not exclude the possibility of holding of another FIG Academy in Baku next year but the Level 3 this time.