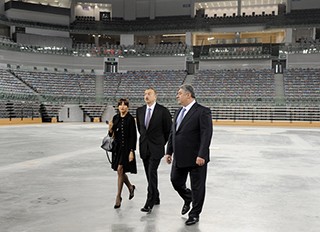 President of the Republic of Azerbaijan Ilham Aliyev and his spouse Mehriban Aliyeva have visited the National Gymnastics Arena to see the construction works progress in Baku on February 17, 2014.

There have been taken important steps in building sports infrastructure, new facilities have been constructed and put into operation in our country for the last years. More than 40 Olympic Sports Complexes were built in Azerbaijan - the active member of the international Olympic movement. Reconstruction of existing sports facilities further enhances the resources of hosting international competitions in our country. Azerbaijan is preparing for the 1st European Games to be held here in 2015. Construction of the National Gymnastics Arena, being a component part of steps taken for reinforcement of the sports infrastructure in the country, is of particular importance. Building of the arena, foundation of which was laid with the participation of the head of state in August in 2009, was under completion now.

Azad Rahimov, the Minister of Youth and Sports, informed the head of the state about the works carried out. It was noted that the facade of the complex was implemented in a special form. There have been installed screens displaying interesting illumination elements here. One of the important factors increasing the significance of the arena mainly assigned for events in gymnastics is that it can be adapted to host other sports events and competitions. The Arena has the ability to stretch from 5,000 to 9,600 seats depending on a scale of the event it hosts. There is a press center, first aid station, choreography hall and gymnasium, a room for doping control, administrative offices, merchandising and concession area, cafes, subsidiary rooms at the complex meeting world standards. There are also boarding facilities at the Arena which is one of the best gymnastic centers in Europe.

It should be mentioned that the President of the European Union of Gymnastics highly valued the conditions created at the Arena as well. Up-to-date gymnastics equipment is installed in the hall according to the recommendations of the European Union of Gymnastics and Azerbaijan Gymnastics Federation. National teams in rhythmic and men's artistic gymnastics, as well as in trampoline and acrobatic gymnastics and in tumbling train in the hall at present. Courses for coaches are also organized here by the Academy of the International Federation of Gymnastics. For the last 2 months, gymnasts from Turkey, Kazakhstan, Latvia, Mexico and Hungary have taken part in the training camp held in the hall. It is expected that athletes from Canada, the Czech Republic, Greece and Finland will join the training camp to be held in near future.

The head of the state and his spouse were presented a garment from the national team's sports outfit.

A memory photo was taken in conclusion.